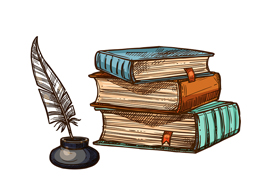 In Chekhov’s The Seagull, there is a character called Trigorin. He is a writer (a good writer, he thinks his epitaph will say, but not as good as Turgenev) who has always a little notebook with him to take down the interesting things that people say, or anything else that catches his fancy.

I have never been as assiduous as Trigorin in keeping notebooks, but nevertheless I have accumulated a large number of them over the years, which have piled up on a table in my study. I decided to leaf through a few the other day, and I found them fascinating in more ways than one.

They are completely undated; I started them, put them aside, and continued them at random. Often, but not always, their contents could refer to any time in the past 35 years. Like my waistline, my writing hasn’t changed in that time and so offers by itself no clue as to when they were written, nor any indication as to where they were written. They contain scraps of speech, telephone numbers, quotations, addresses of rendezvous, booking references, the beginnings of articles, and doodles.

“What is recorded in them is as alien to me now as if it had been written by someone else.”

The first notebook I looked at had some entries that clearly came from the time I was a doctor in prison:

A prisoner entered prison with a burnt hand.
“I was trying to burn a car,” he said.
“Why?” I asked.
“To get rid of the evidence.”
“It looks as if the evidence nearly got rid of you.”

An old prison warder: “I’m retiring after forty-four years in uniform.”
“Was it different in the old days?”
“Yes. Prisoners had much less freedom and they didn’t see a doctor unless they was dying.”

There is a little seam of anecdotes:

I go into a house to visit a patient. I ask her to turn off the television.
“I don’t know how to.”

And then there is something just told me by a hospital manager or perhaps taken from a newspaper:

Really, do you need anything more to understand the modern world?

Here are some things the patients said to me:

The food is rejecting me.

A lot of people don’t believe I’m not well, I don’t believe it myself, but I am. They don’t have to put up with my Raynaud’s, or my arthritis, or my tempers, like my wife does.

If I get any more letters from Social Security, I’ll take an overdose.

I thought it was my head playing games with me.

I was under the influence—of older people.

If I’m moved, doctor, I’ll go on hanging myself.

I don’t let my thoughts rule my head.

You can’t take me to the police—I’m a schizophrenic.

It makes me very disgrumpled.

She’s putting the words into my wife’s mind.

I could talk until the dogs come home.

For the most part I can’t remember who said any of these things, though it is possible that the last was said by a patient of mine who had the alchemical ability to transmute cliché into glorious utterance:

Sometimes, doctor, I feel like the little boy with his finger in the dyke, crying wolf.