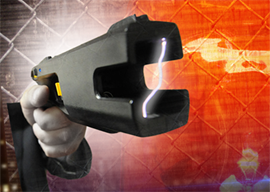 Dark decades of direct experience with human beings have given us reason to operate from an ecumenical distrust of human nature. Although perfectly natural, human nature is a foul entity regardless of what skin color, genitals, or ideology the individual human in question chooses to hide behind. Them humans is sneaky snakes, sho’nuff.

Since there’s literally no “government” beyond the humans authorized to run it, our distrust of human nature leads us to a special wariness of those who possess the legally sanctioned power to harm and extort others. Without ways to keep government power in check, the whole world would devolve into the Stanford Prison Experiment within a week. Then again, since the “governed” are also human beings, we also greet their every word and deed with suspicion—if not outright disdain.

So when someone complains about police brutality, our default presumption is that both sides are at least guilty of something and that we’d need clear evidence of innocence to exonerate anyone. Yes, sure, some police officers are sadistic rageballs who take out their castration fears on the skulls of hapless citizens they’d stopped for minor moving violations. But flipping the flapjack over, many citizens are irredeemably unhinged drunken lunatics who endanger everything in their path and aren’t above lying to score a huge civil-rights judgment that the taxpayers, not the “state,” are obliged to pay. Faced with such a dismal choice, why should we even pick sides?

But sweeping all ideology aside and looking at things in practical terms, if a certain Taser gun had been stocked with fully functioning batteries back in 1991, it’s likely that LA police would never have hammered on a resolutely uncontrollable Rodney King with billy clubs and 53 people wouldn’t have died in the ensuing riots.

If the full-time complainers were handed the awful responsibility of actually having to hold and administer guns, billy clubs, and Tasers, we doubt they’d behave any nobler than the “pigs” on the street already do. Personally, we doubt we’d have the patience to perform a policeman’s job for a week without losing control. It’d be hard to maintain composure after some plastered idiot wandering amid traffic took a swing at us. Hell, it’d be difficult not to tase someone merely for calling us “bro.”

Words such as “justice” and the idea of how much punishment someone “deserves” are fatally subjective. In that spirit, allow us to speculate what we would have done if we’d been wearing the policeman’s badge during any of these recent cases involving law enforcement and Tasers. We make these snap judgments with the understanding that we are receiving the facts in each case only as they were reported and that even the reporters may be lying.

CASE: CALIFORNIA PARK RANGER TASES DOG OWNER IN LEASH-LAW INCIDENT
DETAILS: The Golden State’s “dog community” is up in arms about this story, and if there’s one group you don’t want to upset more than the gay community, it may be the dog community. Slightly before 5PM last Sunday, Gary Hesterberg, 50, was walking his two pooches in a state park near Half Moon Bay. A female park ranger stopped him and told him to leash one of his dogs. When she asked for identification, he allegedly gave a false name. Eyewitness accounts differ on whether Hesterberg’s demeanor was peaceful or belligerent. While the ranger was talking on her radio, she instructed him not to leave and said she’d tase him if he did. He turned his back and started walking away, at which point she tased him.
VERDICT: We would have kept following him while calling for backup. Tasing him was overreaching. Given a motivated and litigious “dog community,” this case may wind up costing millions.