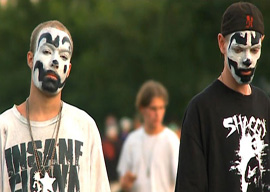 What was it Orwell allegedly said?

“People sleep peaceably in their beds at night only because men in suits are ready to put teenagers in clown makeup on the government’s list of dangerous gangs”?

Doesn’t quite have the same clarion ring as the original.

Millions no doubt sighed with relief last week when the FBI informed an anxious nation that they’d added “Juggalos” to their National Gang Threat Assessment, “Juggalos” being the surprisingly sizable hardcore fanbase devoted to the band Insane Clown Posse (ICP).

The typical Juggalo is a “white trash”/“wigger” male in his teens or twenties who likes horrorcore, wrestling, and Faygo, who wears Bozo greasepaint and sometimes travels with a similarly adorned “Juggalette” girlfriend. Among Juggalos, physical attractiveness is not prioritized and may even be a liability; being a “good person” and embracing the ersatz ICP “family” are said to be more important. “Making the scene” means attending the annual Gathering of the Juggalos (warning: official infomercial—contains nudity and grammatical errors), an outdoor music festival with the same sloppy trappings and instant pseudo-intimacy of all such anticlimactic happenings, but also particularly high levels of comic ineptitude. Oh, and roller-skating gladiator fights.

Symbiotic grassroots rock ’n’ roll subcultures devoted to one particular band aren’t new or novel: The KISS Army is almost 40 years old and the Deadheads are even older. Lady Gaga cultivates her “Little Monsters,” and Justin’s “Beliebers” are as rabidly menacing as only teenaged girls projecting free-floating horniness upon famous “Non-Threatening Boys” can be.

(These “fandoms” even compete for their own awards now, just like the artists themselves.)

Also not new are the “moral panics” such subcultures sometimes inspire. (I still have my marked-up Stanley Cohen around here somewhere, purchased in a used bookstore when I was a high-school punk.)

True, a small number of self-described Juggalos have committed especially depraved crimes, and Gatherings aren’t the pristine oases of peace, love, and understanding that fans insist they are.

Yet the growing hysteria about Juggalos—who probably number in the low tens of thousands—is disproportionate. One website promotes “Punch a Juggalo Day,” while JuggaloHolocaust.com describes its mission as “NUKING JUGGA-SCUM OFF THE FACE OF THE EARTH.”