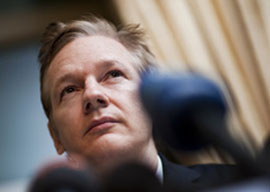 Julian Assange of Wikileaks infamy was arrested in England today. But it isn”t for espionage”his Interpol “red notice” made no mention of the hundreds of thousands of classified government documents he has released illegally over the past year.

Neither does it mention the word “rape,” but you wouldn”t know that from the news reports. Searching Assange’s surname alongside the word “rape” on Google yields nearly 10 million results. Ever since Swedish authorities initially filed”then dropped”then reinstated”sex-crime charges against him late last summer, the words “Assange” and “rape” have been irrevocably wed online.

In a society hypersensitive about gender issues to the point of psychosis, a rape accusation is perhaps the worst claim you could lodge against someone short of adding that their victim was underage. But although certain gender-crazed pompom girls insist that false rape accusations are a vicious patriarchal fiction, by one estimate about half of all official rape complaints are entirely fabricated. Merely searching the word “false” alongside “rape” on Google News will yield a fresh crop of verifiably bogus allegations nationwide with each new sunrise. Try it if you don”t believe me.

Regarding the allegations against Assange, I”ve pieced together the following timeline from numerous sources, most notably London’s Mail Online, which had access to the Swedish police reports. Otherwise, I haven”t been to Sweden for 25 years, so I can”t vouch for any of it….

On Wednesday, August 11, only weeks after leaking nearly 100,000 secret Afghan war documents, Julian Assange arrived in Stockholm to speak at the invitation of Sweden’s Social Democratic Party. Event organizer Anna Ardin, 31, allowed Assange to stay at her flat while she visited her family for a couple days out in the country. After Ardin arrived back home on Friday the 13th, she and Assange went out for dinner, then returned to her apartment for some hot, naked, Aussie-on-Swede action.

The following day, Assange delivered a 90-minute speech about how war’s first casualty is truth. If Ardin was upset by the previous night’s (and that morning’s”woof-woof, Julian!) sexual liaisons, she hid it well. Appearing reasonably untraumatized, Ardin can be seen sitting stage right at about 0:10 of this video. Only ten feet in front of her, facing the stage with blonde hair and a pink sweater, sat Sofia Wilen, her eventual co-accuser against Assange.

In the weeks leading up to the seminar, the 26-year-old aspiring photographer Wilen had developed an escalating nerd-crush for The World’s Most Famous Hacker, whom she described as “interesting, brave, and admirable.” She devoured online news accounts of him and took a holiday from work to attend his speech. She sat comfy-cozy and perky in the front row for his oration’s duration, reportedly snapping photographs of Assange and at one odd point appearing to pose for a snapshot herself. She waited for Assange outside the seminar and managed to get herself invited to lunch with him and three other males. “She was a little bit strange,” one of the other lunch attendees later noted. “Definitely an odd character and keen to get Julian’s attention.”

Assange and Wilen began openly flirting during lunch, then departed alone together in a fruitless search for a laptop charger that unfolded into a brief shopping jaunt (on Wilen’s dime) that ultimately found them entangled in some sort of genital horseplay in the back of a dark movie theater. But Assange cut the night short so he could attend a Swedish crayfish party back at Anna Ardin’s flat. He promised Wilen he”d keep in touch.

That night, while hosting a party in Assange’s honor at her apartment, the already “raped” Anna Ardin Tweeted about how she was hobnobbing with “the world’s coolest smartest people, it’s amazing!” (After going to police on the 20th, she deleted these Tweets.) At some point during the crayfish hootenanny, Assange apparently stepped aside to phone Wilen at her home in EnkÃ¶ping, about 50 miles west of Stockholm. He left a message asking her to call him.

Wilen says she tried calling him on the 15th but his phone was turned off. Assange and Wilen met up on Monday the 16th, and she paid for both train tickets back to her apartment in EnkÃ¶ping. She”d later complain that during the train ride, “He paid more attention to the computer than to me….The passion and attraction seemed to have disappeared.” Still, Assange mounted her that evening and”way to go, Bro!”again in the morning, apparently condomless that time. Wilen was so devastated, she went out to buy food, cooked him a sizzlin”-hot breakfast, and joked while they were eating that he may have made her pregnant. She bought his return ticket to Stockholm, asked him to call, he said he would, but he never did. He even screened her incoming calls”always a big mistake with any one-night stand in a foreign country.

“One would think that a globetrotting David seeking to slay the American Goliath would have the good sense to keep his dick in his pants.”

By the 18th or 19th Wilen had grown frustrated that Assange wasn”t returning her calls, so she phoned that nice organizer lady she met at the seminar”Anna Ardin” inquiring about Assange’s whereabouts.

As the conversation took the sort of turns that conversations between ladies usually take, both Ardin and Wilen realized they”d both had sex with their Hacker Heartthrob during the previous week.

In these sort of situations, one of two things typically happens: The women will claw out each other’s eyeballs to win the man, or they”ll team together to destroy him.

Online accounts vary wildly about exactly what was alleged to have happened with Assange, the girls, and the condoms: Some say he gruffly ignored their requests to use condoms; others say he intermittently used them; others say the rubber gloves broke during sex but that he continued; yet others say he purposely and inscrutably poked holes in the jizzbags and continued happily pumpin” along anyway. At least one of Assange’s accusers claims that he ignored her requests to stop after she realized his sword was unsheathed.