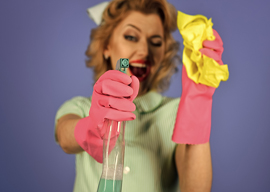 Troubled by unequal outcomes between the sexes, progressive economists Kerwin Kofi Charles, Jonathan Guryan, and Jessica Pan act as if these were necessarily wrong, as opposed to what they are: only to be expected. From this feminized trio’s moral psychology there came a flawed premise, which undercuts their would-be edifying study, “The Effects of Sexism on American Women: The Role of Norms vs. Discrimination.”

Charles et al. equate traditional gender norms with “sexism,” as if there were not still many women who want to be housewives. Of course, such women, we’re supposed to believe, were shaped by “sexist attitudes,” since any divergence from the hubristic professors’ own value system is wrong by definition.

And yet, as Charles Murray, Jordan Peterson, and other disinterested social scientists inform us, many upper-class progressive families continue to live by the traditional gender norms to which academia and the mainstream media are so averse. It’s quite common, for example, for a female lawyer, female doctor, or other successful female professional to marry an affluent man and thereupon begin working much less, or stop working altogether, as he provides for her and their children.

The reason is that, after spending a certain amount of time in the workforce, many women find that they’d rather devote more time, or all of their former professional time, to their children, who—can you believe it?—seem to them deeper sources of meaning and satisfaction than the workplace. Although this decision is made by many female academics and female journalists, I wouldn’t hold my breath waiting for either group, both overwhelmingly progressive, to tell us how “sexist” it is. Yet perhaps with better education, you deplorables—poor, ignorant, and Republican—too may enjoy gross hypocrisy.

Another irony is that, while progressive social scientists relentlessly insist on “gender parity”—utilizing, to that end, any gender disparity as obvious evidence of discrimination—today women are unhappier than ever. In their essay “The Paradox of Declining Female Happiness,” Betsey Stevenson and Justin Wolfers report:

So, despite our culture’s progressive turn—a shift in which “expert research” like that of Charles et al. has played no small part—today women are unhappier than they were in the more traditional past.

“For we dissenters, the only choice is to wage our own war against the progressive establishment.”

documented how the benefits of marriage receded as women’s earning power rose relative to that of men. The years between 1973 and 1983 were decisive. In that decade, young women’s wages climbed steadily while men’s actually fell, never to recover. Women had less reason to marry, and they had less attractive mates should they nonetheless decide to.

The reason, Regnerus explains, is that “equality is the enemy of eros.”

The authors of a recent analysis of the National Survey of Families and Households conjectured that women would use the promise of sex to convince men to do more domestic tasks. Despite the transactional way of framing the problem, the researchers harbored a fond hope: that more equal relationships would also be more erotic ones. So, do men who do a greater share of the housework enjoy more sex? No. In fact, they’re penalized in the bedroom. Husbands who do little or no housework had sex with their wives nearly two more times per month than did husbands who do all of it. Meanwhile, doing a greater share of traditionally male work around the house—mowing the lawn, fixing things—correlates with more sex. Men and women are not attracted to sameness, but to difference.

Several things stand out in all this research. To begin with, women wrongly assumed that the workplace would necessarily be an improvement upon their traditional domestic role. There are, of course, many women for whom it has been so. Yet there are also women, seemingly a greater number, for whom the opposite has been true.

And, as we learn from various wise and knowledgeable women—Amy Wax, Catherine Hakim, Camille Paglia, Christina Hoff Sommers—feminism typically doesn’t account for, let alone value, the immense variety of women’s preferences and interests. Instead, upper- and middle-class professional women tend to assume that their own lifestyles are right for women per se. “Lean in,” urges the bland Sheryl Sandberg. “Down with the patriarchy!” cheer an endless number of women academics and journalists, their minds ruined by other women. Meanwhile, ironically, insofar as women have bought into professional life, their happiness has declined.

Another important thing to understand is women’s natural reproductive burden. In the professional domain, as in life itself, the primary obstacle for women is not men but Nature itself. It’s very difficult for women to negotiate a compromise between professional goals and family. Men are not very good at doing traditionally female domestic tasks, and have little interest in becoming so. Marriage is thus a strain on many women, as they struggle to both work and perform a majority of the household responsibilities that they have always met. No wonder they file for seven out of 10 divorces, which have awful effects on children.

Well-meaning men try to lessen women’s domestic workload, but imperious Nature, always triumphant, pushes back: Owing to female hypergamy, such men become less attractive to women. Women say they want equality, but are attracted to confidence, success, and power and dominance generally. Thus, “Go by what women do, not what they say” is a maxim in the manosphere. “I will not say that women have no character; rather, they have a new one every day,” quipped the poet Heinrich Heine.

It is an ageless question, what women want. The sex act itself affords profound insight into the answer. The active man penetrates while the passive woman receives, and in her wild, primordial cries there is a parallel to what she wants from man in general: vital masculinity, or power and pleasure. Add resources (the more the better), protection from harm, and emotional intimacy and the answer is pretty well complete. For women as for mankind in general, equality is a hypocrite’s power grab, nor is there anything a woman disdains more than a man who wants only to be “her equal.” (Of course, here as always, I write to say the truth, and could not be more indifferent to the offense of you perpetually aggrieved levelers.)

The rise of women in the workforce decreased the sexual market value of men in general, who are no longer immensely valuable just because they get up and go to work each week. Add to this change the loosening of sexual mores, and the result is the destabilization of the sexual marketplace and the family. In this state of affairs it is children—remember them, feminists?—who suffer the most.

“Women rate an incredible 80% of guys as worse-looking than medium,” OkCupid’s founder Christian Rudder tells us about his popular dating website. “The average-looking woman has convinced herself that the vast majority of males aren’t good enough for her.” Rudder gives several representative photos of men who range from truly average to handsome. Then he concludes the summary of his research with this sharp comment: “Females of OkCupid, we site founders say to you: ouch!…it’s women, not men, who have unrealistic standards for the ‘average’ member of the opposite sex.”

And yet, it is only too easy to find fault with women for their unrealistic expectations. For though some reproach is certainly in order here, the crucial thing to know is that these extreme expectations serve the ends of our species. Women should prefer the very best men, and so they do, albeit with the usual human delusion.

But while such ruthless hypergamy is a law of Nature itself, it can create terrible chaos and destructiveness. If a minority of alpha males, in symbiosis with female hypergamy, effectively control the sexual marketplace, some of the men who lack access to women will use violence to gratify their desires, or to take revenge on women. Indeed, that is just what we find today, whether it’s the incels of North America or the sexual assaulters who abound in the polygamous Islamic world (which now includes Europe, alas).

To this grave problem civilization has provided a solution: monogamy, itself a rather challenging business. But despite being a convinced atheist, I see no reason to believe that any secular liberal culture will be sufficiently monogamous. Such wisdom is the fruit of collective organic experience. It is vain, then, to hope that enough people, by means of rational reason, will choose to practice it of their own accord. Monogamy must be collectively enforced through guilt and shame, nor are these sufficient without religious imperatives. Have you been to a nightclub lately?

Anyway, though they may be on the way out, gender norms are essential, it seems, to a stable and lasting culture. As I pointed out in my last column, current data and trends suggest that the gender equality experiment ultimately is unsustainable. Subscribing to this belief, it should go without saying, hardly makes one sexist or some kind of Archie Bunker type. Unlike Charles et al., my perspective comprehends the entire culture, not mere individuals, and I have the future in view.

Charles et al., like social scientists and academics generally, have a vested interest in using junk science to realize the feminist manipulation agenda, which demands “equality,” irrespective of merit and consequences. So too with mainstream media. All of these deluded persons achieve success and social distinction by waging war on traditional values, including gender norms. They pretend to value tolerance and open debate, but a discussion about first principles is off the table. For these progressives, the matter is already settled, so the rest of us need to get in line.

It’s obvious, then, who the real enemies of the people are. For we dissenters, the only choice is to wage our own war against the progressive establishment. At present, we are losing, and the outcome shall decide the fate of America.