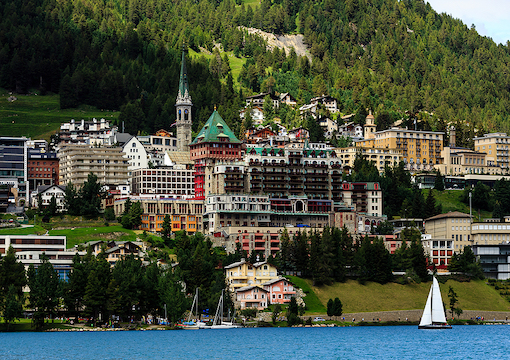 ST. MORITZ—Once upon a time, not that long ago, St. Moritz was the world’s greatest resort, an exclusive winter wonderland for royalty, aristocrats, and shipping tycoons. I’d say the place reached its peak during the ’40s until the late ’60s, and like the rest of the great old resorts around the world, it’s been downhill ever since. The reason for this is obvious: The newly rich barbarians outnumber the old guard, and resorts rely on big spenders. The big spenders live in hotels, eat every meal out, attend nightclubs, and enrich the boutiques that line the streets and sell only expensive bling. In St. Moritz Dorf, down by the lake, yellow stone apartment houses that reminded me of council flats have proliferated since the last time I was here, arousing my suspicion that someone somewhere has taken a rather large bribe to allow these horrors.

St. Moritz is now a large traffic-choked town, but the slopes, Nordic skiing valley paths, ice-covered lake where polo and horse racing take place, and bobsled and cresta runs make it unique among skiing resorts. As I was there for only two days I had left my skis behind, and while speed-walking on the huge lake I heard English cries of yes, no, and how’s at. I looked and there they were, a bunch of Brits wearing dark coats over their whites playing cricket in the deep snow. They looked ridiculous but it was great fun, and they were having lots of it. A bit farther west of the lake is the 1864-built Grand Hotel des Bains, now the Kempinski, a graceful white belle epoque structure whose entrance adjoins the beautifully kept Nordic ski tracks that run for tens and tens of miles.

“Once back in Gstaad I put myself on a strict diet of one drink per night, and managed to do it for two nights running.”

I first visited St. Moritz in the ’50s, stayed at the Palace Hotel, and looked down on a pristine valley and lake surrounded by trees, now encircled by ugly buildings. It’s called progress. But as I’ve previously written, the Corviglia Club hasn’t changed; its membership young, attractive, friendly, and elegant—the way it was when I first came into the club one or two generations ago. I was flattered to be seated on the right of the president’s wife, and on my right I had the great beauty Mafalda of Hesse during the Saturday-night grand party for 300. I saw many old friends like Michel de Carvalho, Rolf Sachs, Jean de Iturbe, George Livanos, Pavlos of Greece, plus lover boy Arki Busson, and even managed to fall down drunk at the end, dragging down the sweet Darcy Rigas with me. The president of the club, Prince Augusto, helped me up and announced it was time to go home. So much for an elegant exit, which is a pity, because deep down I think this was the last time for me in the Engadin.

Once back in Gstaad I put myself on a strict diet of one drink per night, and managed to do it for two nights running. Oh yes, I almost forgot—kickboxing. Nicola Anouilh and I arrived ready for action in the Saanen gym, but it turned out to be a bit one-sided. By this I mean that both the locals and the visiting rich of Gstaad can dish it out, but they do not have to take it. Let me explain: One’s opponent wears baseball-catcher-like gloves and the attacker follows the commands of the catcher, left, right, hook, uppercut, kick, kick, left, right, hook, and so on. Most of the participants looked ferocious, punching and kicking as if there was no tomorrow, the only trouble being nobody hit back. This is not the way I learned karate and boxing. You throw a right at your own peril, as a stiff jab to the nose is the antidote. Jab, jab, right cross, low kick, high kick, back fist strike, jab… It’s easy when there’s nothing being thrown back at you. As Mike Tyson memorably said, “They all have a plan until I hit them in their motherf—ing mouth.” Mind you, as far as exercise is concerned, it’s among the best I’ve ever had. In no time at all your heart is pumping a mile a minute and you’re gasping for air, but you throw leather and kicks and more leather until you hear the word stop and then you try to breathe as deeply as possible and then it starts again and again and again. After an hour one’s drained of any desire (even of Lily James or Greta Gerwig) except to lie down alone in a cool place and close one’s eyes and think of nothing at all. But the real thing it is not. And that’s why everybody’s doing it. There’s no fear involved, no danger, no thrill of conquest, a bit like making love to a plastic doll, but still the greatest workout ever.

And now for some ugly truths: For too long indiscriminate bombings of Gaza by the Israelis or Yemenis by the Saudis are treated as old news by the media. Now that European Greek Orthodox Christians are being massacred, it’s headlines. They are my coreligionists, the Ukrainians, and as of this writing they’re holding their own, but murder of innocents is murder in any language. And if you for one moment believe that Russian billionaires will be expropriated and snubbed in London or New York, you also believe that Boris Johnson’s wives cheated on him and were at fault.