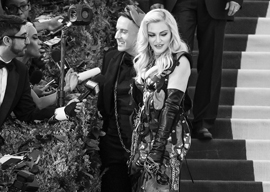 Jeremy Scott and Madonna at the Met Gala

Much like the poor, the charity ball has always been with us, but lately it’s turned into a freak show. Something is rotten in the state of New York, and the name of it is the Met Gala. Once upon a time, the Metropolitan Museum’s gala ball was fun. Serious social-climbing multimillionaires competed openly for the best tables and for proximity to blue-blooded socialites like C.Z. Guest and her ilk. Pat Buckley, wife of William F., ran the show with military precision, allotting the best seats to those who had paid a fortune for them, but also to those who were young and handsome and whose pockets were not as deep. I used to be a regular. Then something happened. Anna Wintour took over after Pat’s death and the party turned into a freak show no self-respecting circus would allow on its premises.

Last week the uglies were out in force, the newspapers and glossies revealing themselves as fake-news purveyors by calling the show exclusive and impossible to get an invitation to. Do the people who write such crap take the rest of us for total idiots? The Met Gala is reserved for a few D-list celebrities, fashionistas, and advertisers. Proper souls wouldn’t be caught dead on the premises, especially near the Kardashian table. The ugliness of some of the attendants assaulted one’s frontal cortex, and I only saw the photos; imagine the horrors of seeing it live. Clinging like a barnacle to the Met’s hull, Anna Wintour’s horror show diminishes a great American institution. The freak show should be staged in Times Square, in the exact spot where the peep shows of old used to be. Actually, the whole shebang should have been charged with public lewdness; it was all drugs and thugs, but worst of all was the extremely unsightly Lena Dunham showing off her private parts.

“Madame Macron will take care of us from now on. Yippee!”

But why am I writing about such ugly and pretentious people? Let’s move to comedy and the French farce for a change of pace. Last Sunday was a great day for us oldies. Madame Macron will take care of us from now on. Yippee! Actually, if Pip had married Miss Havisham it would almost make more sense. Les mauvaises langues have it that Emmanuel Macron gets a stiffy every time he sees Angela Merkel, and that the German hausfrau has given him a nude picture of herself. (No wonder the guy turned gay.) Mind you, I’ve always loved older women—until I turned 25, that is. After that age, preferring older women becomes a profession. Wendi Murdoch, age 48, trips the light fantastic with a 23-year-old “male model” by the name of Bertold Zahoran. Some people in her building, 834 Fifth Avenue, pretend to be shocked. Money must circulate, I tell them, and she’s giving it in the same spirit that she got it from Rupert.

Another cradle snatcher, Carole Radziwill, I met a long time ago. She was married to Anthony Radziwill, who died at a young age from a horrid cancer. Carole has turned herself into a celebrity of sorts by appearing on a reality show, the electronic version of the dirty books we used to read as kids in the loo. Carole is 53 and is stepping out with a “chef” by the name of Adam, who is 22 years younger. She thinks he’s very saucy. I think he’s a better money manager than cook.

Do I think that Emmanuel Macron has started a trend for older women? Gigolos have always liked older ladies, but no, I don’t think that very old gals will become the fashion. Ironically, Danielle Darrieux, the wonderful French actress, turned 100 last week. She was Porfirio Rubirosa’s second wife, during the German occupation, and Rubi always had a weakness for her. He married two women for love, and three for their money. All in all, and despite the fact the three rich ones were the three richest in the world—Flor de Oro Trujillo, Doris Duke, and Barbara Hutton—his total intake was only about $5 million. Plus a B-29 airplane that had seen better days, eighty bespoke suits, and a few gold cigarette cases. Nowadays, modern gigolos like some of those I mentioned above stand to make much more than poor Rubi. I guess inflation applies to all professions, including the oldest one.

Everything is now cause for offense, except being a gigolo, of course. Take the case of Ilie Nastase, of whom I am no fan because he was such a cheater on court. So he asked what color the biracial baby of Serena Williams will be—so what? Screams of racism followed. But the world was mum when a TV commentator, Doug Adler, was fired for calling Venus Williams a “gorilla” during the Australian Open. Except that he said nothing of the kind. He called her tactic of sneaking up to the net “the guerrilla effect.” He was made to apologize, then fired. Not a word in his defense from the Williams camp. An innocent man lost his job for something he never said, yet the Williamses stayed mum. They prefer it that way, forever victims. They need to be taught some fairness from the younger men they will eventually end up with. Actually, in their case, I hope the guys take the dolls to the cleaners.