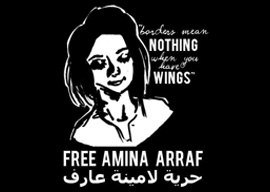 The eminently credible mainstream media was all aflame last Tuesday with reports that a prominent lesbian blogger in Syria had been captured by armed-and-hairy secret police who were none too pleased with her lesbian blogging. It was presumed that at the very least, her hatefully oily captors would administer a lesbian flogging.

Without bothering to so much as toss in a “reportedly” or “allegedly,” places such as CBS News, MSNBC, TIME, the Washington Post, the Huffington Post, and the Guardian posted articles on June 7 claiming that Sapphic Syrian was in the clutches of homophobic Islamist militarists.

After all, her existence had already been established back in April when pint-sized peter-puffer Andrew Sullivan of The Daily Beast spoke glowingly of Amina Arraf, self-described “Gay Girl in Damascus,” and her grandiloquent account of how her glaring father stared down glowering, gay-hating Syrian guards who’d come to grab and/or grapple with her.

Her existence was further confirmed late in May by CNN in an article pondering whether the Arab Spring would possibly be unfair to homos.

Then, suddenly sometime last week, NPR’s Andy Carvin acted as if he was the Last Reporter on Earth and decided to check some facts. He said that his contacts in Syria’s gay community claimed they had never heard of an “Amina Arraf.” Then it occurred to him that no one on Earth had ever said they’d met Amina in the flesh. Then a Croatian woman in London said that her ex-husband contacted her after seeing pictures in the media that claimed she was the kidnapped Syrian blogger. The woman, Jelena Lecic, said that this “Amina Arraf” person had stolen an estimated 200 pictures of her and had used them on her blog and a Facebook profile. Finally, it was revealed that all of the online correspondence that “Amina” had done with others was traceable to a pair of IP addresses in Edinburgh, Scotland, neither of which was available for use as a proxy. When reporters and government officials worldwide could find no trace of an “Amina Arraf” ever existing, it became clear that there was no Gay Girl in Damascus.

This morning it was revealed that “Amina Arraf” is actually a 40-year-old Scottish activist named Tom MacMaster. He said that although nothing he wrote was actually true, he was trying to “illumine” events that actually were true by, well, writing things that were completely untrue.

This isn’t the first time a middle-aged man has masterfully played the sympathies of gullible progressives by posing as a young lesbian. Back in 2004, a reputedly bisexual woman who called herself Plain Layne was revealed to be a portly Minnesotan man named Odin Soli. He had received Web infamy years before that by posing as Acanit, described as “a young lesbian Muslim girl with a Jewish girlfriend.”

But what seems far worse than pretending you’re a gay person suffering indignities is actually being a gay person whose identity demands so much persecution, they wind up inflicting it on themselves. This sort of thing doesn’t fit the progressive script at all, which is probably why you’ve never heard of any of the following cases.

In 1997 someone distributed posters across the Eastern New Mexico University campus that read:

Are you sick of queers polluting this great land with there [sic] filth? I thought so. Want to do something? Join the Fist of God. With his might, we can ride [sic] the world of there [sic] sickness. Ask around. We’ll find you.

Take us seriously, or we’ll begin executing one queer a week following this list.

People listed on the posters said they began receiving threatening letters and emails. Then a “lesbian teaching assistant” named Miranda Prather —listed as the first to be murdered on the posters—says she was attacked in her home by a knife-wielding assailant who’d slashed her cheek. Police subsequently reviewed surveillance footage from a Laundromat where one of the hate posters had appeared. It showed that Prather was the person who’d been tacking up the posters all over town. A knife found in her home matched the slash marks on her cheek. She pled guilty to harassment.

In St. Cloud, MN, only two weeks after the iconic but still-contested 1998 murder of Matthew Shepard, a senior college student named Jennifer Prissel said that a pair of men attacked her in a parking lot while punching her, cutting her face and chest, and screaming anti-lesbian epithets at her. St. Cloud State University’s Pro-Gay Machine geared up to protect and honor her, raising $12,000 in donations toward helping to find the perpetrators. Prissel then confessed that all her wounds were self-inflicted. Still, “the campus lesbian, gay, bisexual and transgender student organization” said that the incident represented “a giant step forward” in creating homophobia awareness.

In February 2002, rugged Montana lesbian mountaineers Carla Grayson and Adrianne Neff accused unnamed homophobes of setting fire to their Missoula home. The pair speculated the arson resulted from the fact that they’d filed a lawsuit claiming anti-gay discrimination in healthcare only days prior to the inferno. But investigators found what was described as “an elaborate arson device” involving “gasoline-soaked rope strung through both floors of the house, with intermittent piles of gasoline-soaked rags and socks on it.” The gasoline that had been used to light the fire was traced to the couple’s garage. Although Grayson and Neff were never named as suspects, police dropped the investigation of potential other arsonists. A similar case involving a lesbian couple who went from accusers to suspects in a house fire is now unfolding in Tennessee.