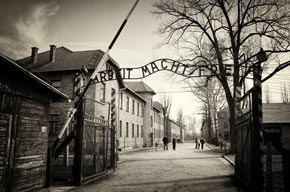 It is the tragic reality of my being that I”m forced to justify myself every time someone learns what I did in the past and what I”ve been thrust back into doing in the present. When I”m fortunate enough to be in a room with people who have no idea who I am, if I”m asked what I do for a living, I always answer “ceramic lobsters,” because there’s no better way to ensure dead silence and zero follow-up questions.

But more often than not, I”m forced by my infamy to give an honest answer: “I attempt to correct the historical record regarding the Holocaust, primarily by sniffing out and exposing fake artifacts and fraudulent or improperly-used documents.”

And that’s when I get the almost inevitable response: “Why?”

The “why” argument goes something like this: “Why make a big deal about fakes or frauds in Holocaust history? Isn”t the essence of the Holocaust still true? Jews suffered and died, right? So all you”re doing is empowering those who would take your work and deny the whole thing. Even if this or that gas chamber is fake, why point it out?”

And my usual reply to the “why” question is: “I do it precisely because people like you are so quick to ask such a fucking inane question.”

Let’s look at the art world. Fakes are a massive scandal whenever they”re exposed. No art historian is going to say, “Well, that might be a phony Vermeer, but it’s such a nice picture”I”ll label it as genuine because it”ll help get kids interested in the Old Masters.”

“Professor Van der Hoogenmeep, have you checked to see if that new Rembrandt in your museum is genuine or not?”

Sure, there have been cover-ups of artistic forgeries, but that’s because the price an expert pays in the art world for having presented one is high. There are repercussions. For the forgers, too.

When someone responds to my revisionism with the “why” question, I”ll ask them if Holocaust history is more important than art history. Typically, they”ll say something like, “Of course Holocaust history is more important! Never again! Remember to never forget, and never forget to remember!” I”ll then close the conversation by pointing out that if I had said that my job entails sniffing out art forgeries, I wouldn”t have been asked such a stupid question as “Why?”

Let’s get something straight”I am not the one “empowering” Holocaust deniers. That honor goes to the mainstream “experts” who manufacture or tolerate the fakes. Those are the folks who”ve polluted the history; I”m just trying to sort that mess out. If you want to get angry at someone, get angry at them. Every fake I discovered or helped expose in the 90s was the product of people who should”ve known better:

For decades, the staff of the Auschwitz State Museum misrepresented an air raid shelter as an “original state” gas chamber. I exposed that fraud in 1992 after interviewing senior curator Dr. Francizsek Piper on camera.

After the opening of the Simon Wiesenthal Center’s Museum of Tolerance in 1993, the curators took a 1961 Polish fictional film titled The Ambulance and reedited it to appear as “found footage” of a Nazi gassing of children. I torpedoed that sham in 1995.

For years, the officials at the Majdanek State Museum displayed a supposed gas chamber”equipped with a window and doors that lock from the inside and open into the room. In 1994, the museum’s research director, Tomasz Kranz, admitted to me that it was actually a simple delousing room after I showed footage of the phony “chamber” on national TV.

The U.S. National Archives and the U.S. Holocaust Memorial Museum “celebrated” the museum’s grand opening in 1993 by collaborating on a book in which old Army Signal Corps footage of a Paris rifle range was “repurposed” as footage of a gas chamber. I uncovered that deceit the same year.

In 1996, Raye Farr (then-film archives director of the U.S. Holocaust Memorial Museum) wrote a letter to me in which she revealed that the “Mogilev footage” (the supposed footage of the first Nazi gassing) was widely considered to be a Soviet fake. Ten years later, she was still gushing publicly about the footage being authentic.

In a 1994 interview with noted “skeptic” and acclaimed prop comic Dr. Michael Shermer, Michael Berenbaum (then-director of the U.S. Holocaust Memorial Museum and its research institute) conceded, after being quizzed about my work, that he”d never actually examined the supposed gas chamber door displayed in his own museum as proof of the Nazis” infamous murder weapon.