Keep the Children at Home 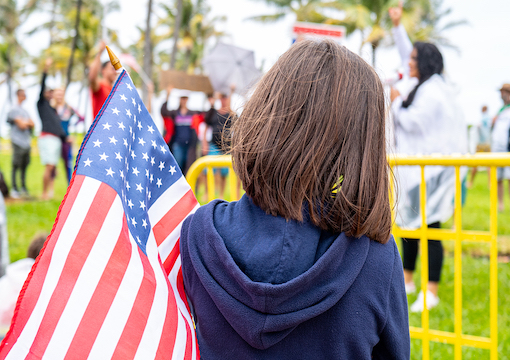 When I first saw the mural of George Floyd with large angel wings, I assumed that it was a satire on his sanctification—effective, perhaps, but not in the best of taste. Shortly afterwards, however, I realized that the mural was in earnest: The picture of the mural in the newspaper included a man genuflecting before it, and the caption said that he was making a “pilgrimage.” Apparently, St. Peter can no longer cope alone at the pearly gates; he need bouncers, too, heaven having become something like a nightclub.

George Floyd was not a saint; in fact, he was a bad man, and being killed by a brutal policeman does not change a man’s life from bad to good. He was a man of many convictions—criminal convictions, that is, not political ones—and at least one of his crimes was of deep-dyed malignity. Along with five others, he broke into a pregnant woman’s house and held her at gunpoint while his associates ransacked the house for drugs and money. This is not the kind of crime that results from a sudden surrender to temptation. It was premeditated and planned, albeit not very intelligently or successfully.

George Floyd was not a quick learner. He had several convictions for possession and supply of drugs, yet when he moved to Minneapolis, allegedly to turn over a new leaf, he still took drugs, and a video showed him discarding what was probably a packet of drugs when he was first arrested.

None of this exculpates the policeman, Derek Chauvin, and no decent person would suggest that it did. But the ludicrous sanctification of George Floyd naturally conduces to an examination of his character, and is moreover a sign of our modern tendency to make martyrs or saints of victims. But victims do not have to be martyrs or saints in order to be victims, and George Floyd certainly did not die for any cause.

“As is so often the case, sentimentality is but a short step away from brutality.”

As is so often the case, sentimentality is but a short step away from brutality. The sanctification of George Floyd implies that the character of a victim of murder is in some way a measure of the seriousness of the murder, when what is wrong with murder is that it is murder. Even the murder of a very bad man is murder, such that if Derek Chauvin were killed in prison by other inmates, it would still be murder. We may in our hearts regret the murder of a good man more than we regret that of a bad, but the law can take no notice of such a distinction. Any other attitude would be to justify or excuse murder.

Another example of the relation between sentimentality and brutality has been the use of very young children in demonstrations. There are videos of two girls, 9 and 7, one making a speech at a demonstration and the other marching in a demonstration, her pretty little face contorted with hatred, chanting a horrible slogan, “No justice, no peace” (a justification in advance of further looting, or worse), and making aggressive gestures.

Clearly they had been put up to all this by their parents. If they had been born in Nazi Germany, they would have rushed up to the Führer to present him with flowers. And no doubt the parents of the little girls, in the pride of their self-righteousness, will continue to indoctrinate them into becoming mental clones of themselves, in the belief that decerebrate rage and resentment are really a manifestation of generosity of spirit.

The little girls themselves, deeply unattractive as they have been made, are of course not themselves to blame. But what kind of fathomless sentimentalism is it that believes that a cause is justified or strengthened by the use of parroting children of 9 and 7? It is not what the children parrot that counts, horrible as it might be, but that the children parrot it, that they have been turned (presumably by their parents) into mere instruments.

Needless to say, one never knows what proportion of the population is in agreement with internet commentary, or the strength of its agreement or disagreement. But even so, the fact that a substantial number of people, probably of above average level of education, cannot see the obvious—that the little girls had been manipulated to the point of abuse—by parents or others was to me alarming. I was reminded of North Korea, which I once visited, where small children were dragooned to the point of exhaustion into taking part in huge kitsch ceremonies to the glorification of evil. We are not at the same stage yet, but I suspect that there are many monomaniacs who wouldn’t mind it if we were, provided only that it was their ideas (being indisputably correct, morally speaking) that were imposed.

In 1952, the historian J.L. Talmon wrote a book titled The Origins of Totalitarian Democracy, and we may be seeing the first stage of such a democracy in the recent events. The phrase totalitarian democracy is not the contradiction in terms that it might at first appear, for there is little doubt that there are substantial numbers of people, mostly educated, who not in the least object to the imposition of a dictatorship of their own virtue in the name of the People.

Against this, I make a modest proposal: that it should be against the law for children under the age of 15 (say) to attend political demonstrations or rallies, and that disobedience to this law should be classified as child abuse.