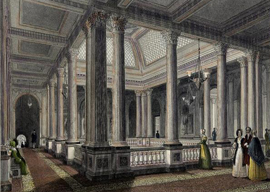 What the outside world doesn”t understand is that Clubland is, of course, about who gets in but also who is kept out. A club is a society of likeminded men. Any veering from the course such as admitting women or advocating “diversity” is like taking a torpedo at the water line.

Mind you, the barbarians are at the gates. As sure as envy is the chief vice of democracy, so is bashing Clubland a high sport for the politicos. The New York City govmint has a number of tests to determine whether an establishment is a private club or a public accommodation. The basic idea is that if members are using a club for business by writing off dues and entertaining customers, the joint is a place of commerce, not a private sodality.

I believe that there is a city agency whose inspectors roam about creating mischief by making such determinations”that is, when they are not on break, holiday, or vacation, or on leave for diversity and sensitivity training, or supervisory, performance-related, issue-counseling, running up overtime, accumulating sick leave, and retiring with six-figure parachutes and colossal pensions.

Hence, the best clubs (those that could afford it) have banned any such business-deducting, entertaining, showing of papers, or any activity of a commercial nature. It’s all to the decided improvement of club life for those of us who are not seared with trade.

An egregious example of club-bashing and a preposterous waste of money and manpower occurred when the US Attorney for this district set up a sting operation with wires and undercover agents to rout out a few New York men’s clubs that were selling Cuban cigars to their members.

I remember it well, because this was during the Clinton Administration when, as we all know, the president was introducing Miss Lewinsky to a novel method of savoring the delights of the Vuelta Abajo leaf, genus nicotiana, in its hand-rolled, tubular conformation.

The men’s club is an English invention. It is said that in imperial times when three Englishmen would meet in a far-flung outpost, two of them would immediately form a club. The first clubs were founded in 17th Century London. Today, White’s exists as the oldest and swellist.

Admitting women or advocating “diversity” is like taking a torpedo at the water line.

It has high standards. A would-be member’s sponsor asked a committeeman how many black balls his rejected candidate had gotten. The committeeman’s reply: “Have you ever seen a bowl of caviar?”

It takes all kinds, and I am a firm advocate of men’s right to have any kind of club they like. There’s a club in London’s Brixton neighborhood called Black’s: “Two black balls and you”re in!”

I”m indebted to Klimczuk and Warner’s Secret Places, Hidden Sanctuaries for a fine rendition of this old Clubland story:
F. E. Smith, the Earl of Birkenhead, when he was Lord Chancellor and walked each day to the House of Lords, developed the habit of stopping off for mictural relief at The Athenaeum, to which he did not belong. He was challenged one day by a club servant: “Sir is, of course, a member?”

“Good grief,” exclaimed Birkenhead, gazing around him, “do you mean to tell me this place is a club as well?”