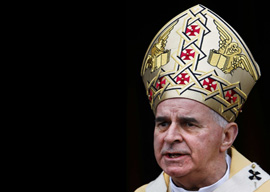 The dramatic departure from office of the Scottish Catholic Cardinal Keith O”Brien, amid allegations of sexual misconduct and gross hypocrisy, has all the ingredients of a potboiler play”lurid plot, supposed sexual shenanigans, political intrigue, impossibly dastardly authorities, impossibly innocent injured innocents”and looming behind it all, the Catholic Church, one of the major villains of the age, cloaked in medieval mystery.

The Scottish Church’s troubles are themselves but a part of the global problems of a 2,000-year-old institution under vicious siege from modernity. As a stricken pope abdicates for the first time since 1415, the Vatican seethes more than usually with tales of gay sex, blackmail, and financial corruption, and the suddenly rudderless hulk seems to admit water at every seam. In his last public address as Pontiff, Benedict recalled the “stormy waters and headwinds” of his papacy, the times when it felt like the ship might sink while “the Lord was sleeping.”

“The Church will always be a target for the world’s wiseacres.”

Like all Catholics, the ex-cardinal has hundreds of thousands of enemies who hate him on principle simply because he is a Catholic. For these prepackaged foes, to be a Christian of any kind is at best stupid, at worst an unforgiveable insult against the spiritless Spirit of the Age. As Virginia Woolf wrote to her sister in 1928 when she heard that T. S. Eliot had found God:

…he may be called dead to us all from this day forward…there’s something obscene in a living person sitting by the fire and believing in God.

Seen from this perspective, Catholics are the worst kind of Christian. They rudely reject the joys of secularism and the “equally valid” cultural claims of Islam, Baha”i, and aromatherapy. Even worse, they accept the built-in inequality of the Vatican, with its rich history, its hierarchy, its horrid “male, pale, and stale” character, and its real or alleged secrets. The Vatican City offers a ready-painted stage for conspiracy theorists. The baroque architecture, the Swiss Guards, and the crimson-slippered Pontiff are tantalizing targets for the world’s despisers of difference.

These “conspiracies” often involve bankers and Freemasons“but most usually in recent years cover-ups of clerical sexual abuse. On this last point at least the theorists are too often correct. For an institution that prides itself on having survived two millennia, the Church has been very clumsy in the way it has dealt with recent allegations of child molestation by priests. Such allegations are almost as old as the Church and will always be leveled against those who make a fetish of celibacy, and traditionally the Church has managed to suppress them, relying on the shame of the abused and the discretion of the episcopate. Even in our age of sexual obsession, eternal grievances, and instantaneous media, the Church appears to believe it can simply obfuscate the issue as it has always done. That sexual abuse is even more common among the secular and that only a tiny proportion of priests are guilty in any case does not alter the fact that a would-be moral exemplar has to adhere to higher-than-usual standards.