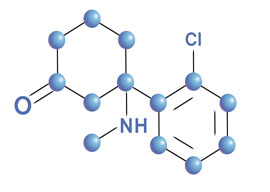 “It blew the doors off what we thought we knew about depression treatment.”

Forty percent of human beings will experience at least one depressive episode in the course of their lives. Every year 13″14 million Americans are diagnosed with major depression. “Of those who seek treatment, 30% to 40% will not get better or fully recover with standard antidepressants,” says mainstream medical site WebMD.

That makes 5″6 million chronic sufferers in the U.S. alone. A big enough market…and one that may have stumbled backward upon a blockbuster drug capable of reversing extreme or long-term depression”in as little as 45 minutes.

In 2014 a trade reporter revealed how, “in a handful of ketamine clinics around the country, people who weren”t helped by standard treatments [were instead] getting a series of [ketamine] infusions to ease their depression. The drug has also been used in emergency rooms for curbing suicidal thoughts, making it a potential lifesaver.”

Whether chronic (recurrent) or resistant (untreatable), severe depression is a matter agreed upon privately between doctor and patient. The use of ketamine for depression therapy has hitherto been “off-label””that is, not for the medication’s intended use but prescribed at the discretion of a GP or psychiatrist.

“Ketamine’s discovery as a depression treatment has progressed the cause that is medical comprehension of depression”and by a quantum leap.”

Medicine is a science, of course, and much remains unknown about this “miracle drug.” And depression has forever been a mysterious condition that science only partially understands. Ketamine’s discovery as a depression treatment has progressed the cause that is medical comprehension of depression”and by a quantum leap.

As NPR recently reported, “About 18 months ago, researchers at Yale found a possible explanation for ketamine’s effectiveness””and simultaneously gained an insight into the very nature of depression, a double win. “[K] seems to affect the glutamate system in a way that causes brain cells to form new connections,” NPR reported.

This discovery is vital.

The crux of depression treatment up to now has been that, “for decades, depression has been seen as a problem of monoamines like serotonin and norepinephrine, and their activity is the target of most commonly used antidepressants.” So wrote Kristina Fiore on 2014’s MedPage Today.

However, interest in another neurotransmitter entirely”with regard to mood disorders”is gathering pace, and this transmitter is called (guess what?) glutamate: the same transmitter that Yale researchers found K to positively influence in the creation of new “neural pathways,” to use a term that has gained profile in the past few years.

Glutamate is the most common “excitatory” (or, perhaps, reactive) neurotransmitter in the brain. In theory, glutamate’s well-recognized influence on the brain’s neuroplasticity“its “ability to reorganize itself by forming new neural connections [or “pathways”] throughout life””could be the key to its impact upon depression, too. Neuroplasticity is key to treating or reversing depression, as this connection-forming ability may be stunted or seriously diminished in depressed persons” brains.

It makes a simple kind of sense that it wields such an influence upon the brain and, consequently, upon the mood”seeing as glutamate is indeed the most abundant neurotransmitter by far in the brain. The “neural majority,” if you like. In fact: “Some 80% of neurons in most brain regions are glutamatergic,” says Gerard Sanacora, M.D., Ph.D. Yale.

Attributed to ketamine treatment is another medical discovery: that ketamine works on the NMDA receptor, a part of the glutamate pathway that’s involved in memory and recognition. Before ketamine was studied in this way, says Mt. Sinai’s Dr. Murrough in a 2015 issue of Nature, no one even knew this pathway was involved in depression.

Ketamine uses glutamate as a conveyor of its effects, thereby reaching 80% of neurons”as we”ve seen. It works in a different manner from other families of antidepressants such as Prozac, Zoloft, and Effexor. This may explain why these other antidepressants often don”t work…

By contrast, the mainstream alternatives to ketamine in depression treatment are broadly twofold, and their mechanism has little if any resemblance to that of ketamine’s. On one hand, you have the (outmoded) MAOI drug family, while on the other hand you have the SSRI drug family”the selective serotonin reuptake inhibitors. SSRIs have the largest market share in the antidepressant business, and they work simply but mostly effectively. They do so by increasing extracellular levels of serotonin (the so-called “happy chemical”) and then limiting its reabsorption, so increasing the levels of serotonin within the patient’s synaptic cleft”or, at the place where it matters. The targeted technique seems somewhat crude in contrast, yet it’s effective for many low- to medium-level depressives.