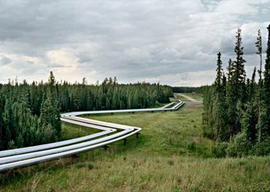 It ain’t “nostalgia” if you weren’t there.

As they stumble through another ham-fisted variation on “Hey! Hey! LBJ,” I worry that my side’s general distaste for marching and sloganeering will be our undoing. We roll our eyes when college kids and celebrities reenact the sixties in the name of the latest trendy cause and break the law with apparent impunity. The sad fact is that more often than not, they win.

As one of my fellow Canadian bloggers puts it whenever lefties get their way again: “Not showing up to riot is a failed conservative policy.”

Case in point: the proposed Keystone XL pipeline from Alberta’s oil sands to the Gulf of Mexico. Anti-Keystone rallies didn’t get as much media attention as their “Occupy” counterparts, but not for lack of trying. Hundreds of pipeline opponents were arrested after a two-week sit-in outside the White House in August. Earlier this month, thousands of them formed the first human chain around the White House since the 1960s. The cause is supported by show-biz functionaries such as Daryl Hannah and Julia Louis-Dreyfus (whose billionaire father is both a Democratic Party donor and an oil-and-gas industry magnate.)

“Maybe we really do need to revisit that ‘no rioting’ thing.”

Publicly, protesters claim the proposed pipeline will destroy jobs rather than create them and imperil six states’ water supplies. But they’re really pissed off because the pipeline will prolong America’s “addiction to oil” and further delay the advent of their solar-powered millennial kingdom. They look at Keystone the way conservatives see free heroin clinics. (I have my own “eminent domain” concerns about Keystone, especially after Kelo, but few people seem to share them.)

Last week, the Obama Administration announced it was delaying its decision on whether to proceed with pipeline construction pending the results of a new “environmental impact” study that, conveniently, won’t be revealed until after the 2012 election. This “temporary” delay may derail the $7-billion project permanently.

Pipeline opponents are spinning this decision as a triumph of old-fashioned grassroots (or more precisely, cornfield) activism led by “Nebraskans who worry that a fractured pipeline might spill oil and contaminate the state’s aquifer.” However, risking the single electoral vote it won from Nebraska in 2008 hardly seems enough to panic the White House.