Kid or Career?, Cringing Over Color, and Kicking the Concubine to the Curb 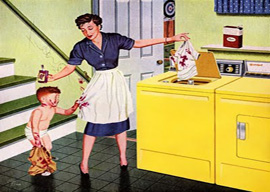 Maybe you were supposed to say “lighter African American” or “lighter-skinned man” to avoid using the word “black.” Maybe it was expected that you go into a lengthy description of facial features—bigger eyes, bushier eyebrows, stronger jaw line, and a longer face. Maybe you were expected to draw a portrait on the tablecloth to avoid using any words at all. Maybe you should have kept mute and demonstrated their differences through pantomime. If it is racist to use the word “black” in a physical description, that is a sad state of affairs and would mean the word by itself was offensive. Under those conditions, people would have to be careful about saying, “What a pretty little black dress” to someone at a party. Now, had you said, “That goddamned stupid dark black can’t DJ for his life,” you were being an offensive racist and deserved the poop stare. But to use the word “black” or “dark” merely as a physical descriptor should be considered a factual observation and should not be taken as a racist comment. But what should be and what is actually in the PC Handbook are two totally different matters. You would need to ask a black man if saying “black man” is offensive and racist, because only he knows the answer and not a bunch of white people making poop stares in a restaurant.

KICKING THE CONCUBINE TO THE CURB

I left my wife and two children for one of our nannies about 10 years ago. She has been living with me ever since, but now I have found someone new. The problem is I feel guilty and downright scared of leaving Olga. She is from Moldavia and was only legally staying in the country because I kept “hiring” her as our nanny. If I leave her, which would entail kicking her out, she would be forced to find another job or go back to Moldavia. What should I do?

You should have thought about the ramifications of leaving your wife and children for the nanny 10 years ago. She could have kept working regardless of your relationship, but it sounds like she thought she had it made and became dependent. That is not so much your fault, because she should have known that if you left your wife and children, maybe you would be prone to leaving her as well. She should have kept her bases covered and her options open. Scared of Olga? Please. Be a man and take what is coming to you. Face the music and dump her.