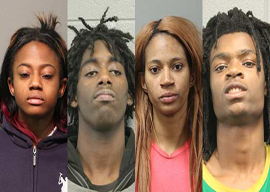 It is with a perverse sort of glee that I can announce we”ve finally found a violent anti-white attack where the media and law can no longer deny it was motivated by anti-white hatred.

I find it severely depressing that it took a grisly video“which the perps livestreamed on Facebook, for fuck’s sake”where four blacks torture an eighteen-year-old schizophrenic bound-and-gagged male while repeatedly taunting him for being white”that finally forced the media and law to grudgingly admit that, yeah, OK, well, we guess that black people can commit violent “hate crimes” against white people too, goddamnit.

Oh, they tried denying it at first”hoo-lawdy, did they try!”but the videotaped evidence was too much to deny. They will proceed to ignore it, just as they”ve done with thousands of similar attacks over the past few generations, but their boilerplate Narrative of Denial collapsed quickly because to deny what was happening on this video would be to publicly announce to the world that you”re a liar, and a bad one at that.

Police claim that on New Year’s Eve, family members dropped off 18-year-old Austin Hillbourn at a McDonald’s in the Chicago suburbs. Hillbourn is white and has allegedly been diagnosed with schizophrenia and attention-deficit disorder. Sometime that night, 18-year-old Jordan Hill”a popular black student at Hillbourn’s high school whom relatives say Hillbourn “idolized””picked him up in a stolen van. Over the next two nights, Hill forced Hillbourn to sleep in the van under freezing Chicago temperatures while Hill visited friends. On Tuesday the pair met up in a West Chicago apartment with 18-year-old Tesfaye Cooper (an aspiring rapper who goes by the handle “PBG HotHead“) and the Covington sisters”Brittany (18) and Tanishia (24).

Over the course of what police estimate to be five or six hours, the quartet of blacks forced an obviously terrified Hillbourn to drink water straight from a toilet, bound and gagged him, punched and kicked him, sliced off part of his scalp (and when they noticed blood, one of them joked that “he leakin”!”), put out cigarettes on his head, and repeatedly threatened to murder him”all while laughing their jolly drunken asses off.

During the half-hour or so of the torture that these four numskulls were supremely stupid enough to livestream on Facebook, they make several explicitly racial comments that point to racial hatred as a motive far more than all the recently overhyped Trayvons and Fergusons and Baltimores and Baton Rouges combined”with the stark difference being that white people aren”t rioting and burning cities, at least not yet.

In fact, I can”t seem to recall evidence of any racial motivation in any of those cases, at least as it pertains to recorded statements from the perpetrators. Kindly correct me if I”m wrong. But in this Chicago kidnapping/torture case, the perpetrators mention race over and over and over.

Sample comments uttered by this dusky quartet of blockheads as recorded by their own dumb hands:

His ass deserve it. His ass from Europe.

His ass a parasite. He a bug. Literally. He don”t belong on this earth.

The media apologists for such events at Salon and The New York Times tried running a deflection move and claimed that if this was indeed a “hate crime””I HATE that term”it was motivated by a hatred for the disabled rather than a hatred of white people because, well, as you all know, the latter is scientifically impossible. On Thursday, a Chicago police spokesman also claimed that Hillbourn was assaulted due to his “special needs“ rather than his race.

There was also an initial screaming reluctance to label this a “hate crime,” most flagrantly demonstrated in this stultifyingly dumb comment by Chicago Police Department Commander Kevin Duffin during a news conference on Wednesday:

When the backlash to these and similar comments proved to be too strong to keep the narrative afloat, both the media and Chicago authorities succumbed and said it was a “hate crime.” On Friday, all four perps were charged with hate crimes as well as a slew of other criminal offenses. Even the moon-pie-faced squawking choco-harpy Symone Sanders”the former Bernie Sanders campaign spokesnegress who in November said, “Oh, my goodness, poor white people!“ when confronted with the fact that video evidence shows in November, a white man in Chicago had been dragged out of a car and beaten by blacks while an onlooker called him “one of them white boy Trump guys””finally capitulated and said what happened to Austin Hillbourn was a “hate crime.”