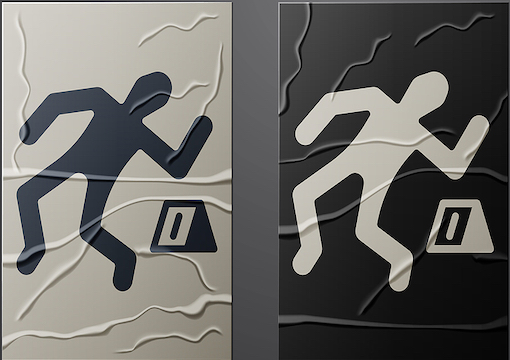 The results are now in on The Establishment’s vast gamble of declaring 2020 to be the year of the Racial Reckoning. Did sacralizing Black Lives Matter as our culture’s highest value even succeed at saving black lives?

My new data shows that elites’ frantic push since Memorial Day for Diversity-Inclusion-Equity (DIE) got thousands more Americans murdered in 2020 than in 2019.

America’s culturally influential have a lot of blood on their hands.

Also, I’m some kind of extremist nut who is anti-murder.

It’s a tradition for local crime beat newspaper reporters to write up during the slow news days between Christmas and New Year’s articles summing up local murder data. So, I was able to find homicide counts for 46 of the 50 most populous municipalities.

In case you are wondering, the Missing Days column records how many days before Jan. 1, 2021, the year-end article was written. For example, San Diego’s 12 percent decline in homicides is based on an end-of-November report, which likely missed a few December murders.

The Top 50 city with likely the lowest murder rate is also the one with the nicest weather, San Diego.

I also dug up year-end murder tabulations for another 58 cities ranking between 51st and 200th most populous. They experienced a total increase of 36.4 percent over 2019. Here are some examples of smaller cities: 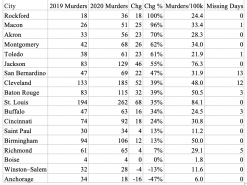 Of all 104 cities, St. Louis had the worst murder rate in the country, with Jackson, Miss., second.

In St. Louis, 0.084 percent of the population was murdered in 2020. At that rate, if you tried to live out your three score and ten years in St. Louis, you’d have more than a 5 percent chance of being slain by your fellow man.

Across the 104 cities, which accounted for 45 percent of the nation’s murders in 2019, felonious deaths were up 37.9 percent this year.

There’s likely a certain amount of upward selection bias in my sample, especially of the 51st to 200th biggest cities. Crime going up is news, while crime staying the same or even dropping is boring.

For example, the biggest city for which I couldn’t find a late-year murder count article is El Paso, which has been famously peaceful for most of my life. I can recall a 1971 Time article attributing El Paso’s low murder rate to the high degree of lithium in its well water. El Paso will no doubt wind up with a smaller number of murders in 2020 than in 2019 when a white anti-Mexican terrorist killed 23 at a Walmart.

(In contrast, Ciudad Juarez across the Rio Grande had 1,646 murders. And Tijuana, across the border from idyllic San Diego, had 2,000 murders. In Canada, in which 3.5 percent of the population identified themselves as black in the 2016 census, murders are likely to have been 3 to 5 percent higher in 2020 than in 2019.)

“America’s culturally influential have a lot of blood on their hands.”

On the other hand, lots of reporters write up their year-end homicide articles either when the city breaks its all-time record earlier in the fall or a few days before New Year’s. So, for quite a few towns I’m missing the New Year’s Eve festivities. Overall, I’d estimate I’m lacking about 2 percent of 2020 from these 104 cities.

My guess is that in the rest of the country, which accounted for 55 percent of 2019’s killings, murders didn’t grow as fast as in the bigger municipalities. Therefore, the national figure is perhaps in the 25 to 30 percent growth range, double the worst year previously recorded, 1968.

One reason the rest of the U.S. likely didn’t see as bad of a rise is that there’s an obvious correlation between how black a city’s residents are and its murder rate. (San Bernardino, Calif., has perhaps the highest murder rate in the country for a city that is only 14 percent black, which is roughly the national average share.) Bigger cities tend to be blacker.

There also appears to be a correlation between how black a city is and how much its murder count grew this year, but that’s less clear. (Baltimore, which has had a stratospheric murder rate since the BLM riot over Freddie Gray’s death in 2015, is the most obvious exception with murders down 4 percent in 2020.)

This would be relevant to answering the question of whether the murder upsurge is more due to cops retreating to the doughnut shop or to blacks responding to media demands that they become angrier by becoming angrier. If murder is growing mostly because cops are depressed by Defund the Police proposals, then criminals of all races should be acting out more. But if the growth in murders is due to hyping the Racial Reckoning, then incremental murders should be concentrated among blacks.

My guess is that when the FBI releases its Uniform Crime Reporting numbers next fall, we will see that the black share of known murder offenders will have grown above even 2019’s 55.9 percent.

On the other hand, my impression from skimming hundreds of year-end articles is that in many cities the police are clearing fewer homicide cases, so it may turn out that the black murder offender rate is even more understated in 2020 by lack of clearances in snitches-get-stitches neighborhoods than it was in 2019.

Another piece of evidence for who is doing the incremental murdering is that more than a few cities reported even bigger increases in shooting incidents and woundings than in killings. For example, murders were up 41 percent in New York City but shooting victims grew 103 percent. New York is evidently experiencing a return to the bad old days of angry black men firing wildly into a peaceable crowd to try to kill the one guy who dissed them.

Wikipedia keeps lists of what it defines as “mass shootings” in which at least four people were struck, whether killed or wounded. The number of mass shootings grew 40 percent this year from 438 to 615. But the number of people killed in mass shootings fell by one from 522 to 521, while the number wounded grew 45 percent from 1,748 to 2,541. Because blacks are notoriously poorer marksmen, this implies that most of this year’s incremental mass shootings were carried out by blacks.

Strikingly, most of that year-on-year 38 percent increase in bigger cities occurred after the death of George Floyd on May 25, 2020, suggesting that the incremental murder rate was somewhere around 50 percent higher than the year-ago numbers during the last seven months of the year.

In year-end media wrap-ups, much of the blame for the 2020 murder surge is instead being attributed to the virus rather than to the national freak-out over the death of George Floyd. But during the ten weeks between the beginning of the pandemic panic in mid-March and his demise on Memorial Day, there was little evidence of a crime wave. For example, on May 19, the week before the sainted fentanyl abuser expired in Minneapolis, The Washington Post reported:

Amid pandemic, crime dropped in many U.S. cities, but not all

By historical standards, how big would a 38 percent increase in murders in one year be?

While murder does respond to trends in social attitudes—for example, murders more than doubled over the course of the liberal 1960s and 1970s—it remains a deeply personal decision. Therefore, totals tend to be rather stable from year to year.

Hence, in no year for which we have good national data—basically, 1960–2019—did murders increase even 13 percent. The biggest one-year growth in total number of murders was 12.7 percent in 1968, the bloodiest year of the ’60s, followed by 12.1 percent in 2015 during the first incarnation of Black Lives Matter.

Until the second coming of Black Lives Matter, that is. I can’t say what the national increase will turn out to be, but it’s likely to be at least double the old 1968 record.

In contrast, The Washington Post’s police shootings database reports that 994 people were shot and killed by cops last year, with 27 percent of them being black. Fourteen were unarmed blacks.

So much for Black Lives Matter.