Killing the West With Kindness 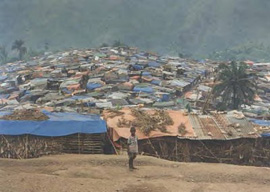 A couple of hard-luck stories:

First story: Randy Johnson of Marion, Indiana was laid off from his job at a paper-products company in 1995 along with 200 other employees. The company had been purchased by Bain Capital six months previously. Mitt Romney was a principal of Bain Capital at the time. Mr. Johnson was laid off: That’s the hard-luck story, the whole thing. The guy was laid off. In 1995. He’s still whining. In fact he’s going professional with the whine: Obama’s people are trundling him around the country to tell his story in halls full of empathetically weeping citizens.

Second story (scroll down a bit on that link): Mr. and Mrs. Smith of Bristol, England have ten kids but only a four-bedroom house. Things are cramped. They are also hard-up: Mrs. Smith tells us that the children have only one Nintendo Wii console between them. If that’s got you reaching for your hanky, please note that neither of the Smiths has held a job since 2001, when the child count was three. They live entirely on government benefits, north of $150,000 worth per annum. The town gave them the house and also delivers breakfast to them.

“The welfare state seemed like a good idea when it first came up a hundred or so years ago.”

The first story there is a story about capitalism, one feature of which is that employees get fired, sometimes through no fault of their own. It happens to the nicest people. It’s happened to me. I was once fired from a job as a dishwasher (for taking a day off without telling the boss). As well as being a firee, I’ve also been a firer. In charge of small programming teams, a couple of times I had to fire people. (There is quite a high level of incompetence among computer programmers.) Swings and roundabouts.

The second story is about the welfare state. The welfare state seemed like a good idea when it first came up a hundred or so years ago. There was a lot of real distress beyond private charity’s reach: the chronic sick or disabled, the unemployed, the old. Diverting some portion of state revenues for relief of that distress seemed like a good idea—like a civilizational advance, in fact. Now it’s a gravy train for the workshy, especially for those willing to put a wall of kids between themselves and responsibility.

The two stories’ common denominator is kindness. Randy Johnson’s beef with capitalism is that it’s unkind. The Smiths’ beef with the welfare state is that it’s not being kind enough to them.

Here’s a different story, one that should be an illustration of kindness in action: the story of refugee resettlement in the USA. I just got back from a lecture by Don Barnett, an expert on the topic. Don ran through points he’s made in his Center for Immigration Studies research papers.