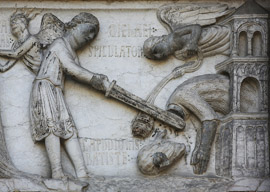 Beheading of St. John the Baptist on the baptistery from Benedetto Antelami. Parma, Italy

For reasons unnecessary to go into, I once found myself at a loose end for a few months on the island of Jersey in the English Channel. For something to do I went into the archives and researched a book about three murders that were committed in Jersey in the space of three months in the middle of the 19th century.

Murder was then very uncommon in Jersey, and it was hardly surprising that the inhabitants thought that there must be some fundamental, and very dangerous, change taking place in their society. Three deaths in the population of the island then was proportionate to about 6,000 deaths in Britain or France today, so the island public of the time might be forgiven for a somewhat panicky reaction.

In fact, though, murder declined in Jersey immediately afterward to its accustomed rate, about one every two or three years instead of three in three months. The sudden apparent increase in murder was a statistical anomaly rather than a social trend.

Even bearing this minatory story in mind, however, it is difficult not to think that there is an upward trend in the use of knives and machetes to commit dramatic murders of the kind that are certain to attract world attention. No doubt we have more technologically sophisticated means of killing each other at a distance than ever before; but we never fully escape our primitive origins. Murder by cutting throats is back in fashion.

The killing of 19 handicapped people by 26-year-old Japanese man Satoshi Uematsu at an institution not far from Tokyo was gruesome in the extreme. One is inclined carelessly to reprehend the crime all the more because the victims were particularly helpless and vulnerable, and therefore specially in need of protection, but of course murder is not a sporting contest in which the perpetrator and potential victim are supposed to be on a more or less equal footing, with the latter having at least a minimal chance to turn the tables on the former. When someone uses the expression “a cowardly murder,” therefore, we should remember that it is the taking of life, not the cowardice, that we ought to condemn. Many a victim of murder has been less than admirable as a human being, but he was not therefore any the less the victim of a murder.

It seems, however, that Satoshi Uematsu was motivated by ideas. He had worked in the home for handicapped people whose residents he returned to kill. He had evidently come to the conclusion during his employment there that the life of the handicapped was not worth living, neither from their own point of view nor from that of society. He wanted both to put them out of their misery and to save society useless trouble and expense: a new version of philanthropy and five percent.

He had announced his intention beforehand, while a psychiatric patient. But it would be wrong to conclude that his ideas were mad, at least in the sense of being so bizarre that they were shared by no other human being. It was, after all, a psychiatrist and a jurist who, soon after the end of the First World War, first coined the expression “life unworthy of life,” a notion according to which life is not a right but a privilege to be earned by some kind of usefulness. Those who were “useless eaters” could rightfully be done to death, provided there was no prospect of them ever becoming useful. To whom or to what they should be useful was left somewhat vague and could, of course, be adapted to taste: the nation, the race, the class, humanity as a whole. But it made of killing, in whosever name it was done, a philanthropic act.

One might have thought that after the First World War, killing would have had a rather bad name. But times were hard economically, and nonproductive people must have seemed not merely superfluous but positively harmful to the general good. As we know, the idea eventually led to the wholesale killing of the mentally handicapped, ill, and unstable in Germany, though those who did the killing could not have been quite sure of their moral ground, for they falsified the records and provided false explanations of the deaths of their erstwhile patients. It is worth remembering that the killing was not the idea of the brutish underclass, nor was it they who implemented it, but the idea and activity of a university-trained class of people in what was then the most highly educated society in the world.