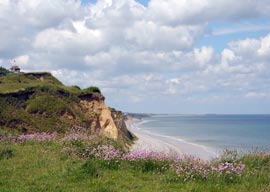 When the Fiske half of my family immigrated to England, we weren”t exactly popular. We arrived at the coast in boats and disgorged en masse only to be met “with spear tips and sword blades,” according to the contemporary account.

Things were different in those days. Luckily we were better armed and better trained than the defending Anglo-Saxon army, and having killed their leader, Byrhtnoth, Earl of Essex, we took control of the region, East Anglia. Most of us Danes, it seems from genetic studies, returned home in the decades following this victory in 991 A.D., but my family did not. We still live fifteen miles from the field of the Battle of Maldon, about which was composed one of the most important poems extant in Old English.

The “English” we fought weren”t the original inhabitants either, nor even were the Celts”whatever that word means (see genetic study above in Nature)”although we were all treated with the same contempt for aboriginals by the Normans when William the Bastard wiped out Harold Godwinson’s army 75 years later 75 miles due south at Hastings. (His army included many Henris, whose sons, combined with Saxon mispronunciation, became Harrisons.)

The reason the Vikings arrived armed to the teeth and spoiling for a fight was because we knew in those days that turning up and claiming asylum or sanctuary would be met with axes and swords, despite the fact that the incumbents were Christians”unlike the Vikings at that point”and that we came from what was effectively a failed state, suffering food shortage, civil unrest, a lack of central authority, and scarcity of womenfolk due to pagan polygamy.

“Fighting to the death for your homeland becomes a less appealing option when even victory is vastly inferior to a state-sponsored apartment in London.”

In East Anglia the Danes had a fair amount in common with the indigenous culture, East Angles, who would have had a ruling class of North German blood trickling down through the ranks as the centuries had passed. Old English and Old Norse were interchangeable enough to allow communication: We could sit in the hall and hear Beowulf recited, indeed we knew the protagonists as it is set in Sweden, while they could hear our Elder Edda, even though they had abandoned the Old Gods like Odin, whom they called Woden, and Thor, whom they knew as Thunor.

Today in Europe, we have become if anything over-Christianized: We render to Caesar without question, turn the other cheek before the hand is raised, and eschew swords, believing dogmatically that they inevitably kill their wielders. The direct result of this doctrinal thinking is our current migration crisis.

Global communication has made distant lands no longer places of threat sought out only by the bold or exiled, but by everyone who finds their current situation uncomfortable enough to risk the transport. Commentators in my country have conveniently forgotten that human beings are not rational about risk”otherwise how to explain the success of the tax on the innumerate that is the National Lottery?”and thus we have Benedict Cumberbatch piggybacking on his stage success speaking Shakespeare’s words to give a pulpit to the palpably false statement “a parent only puts their child on a boat when the sea is safer than the land.” This being with reference to a Kurdish man who put his wife and children on a far-from-seaworthy vessel after three years in NATO member, and soon-to-be EU member, Turkey.

Cumberbatch might be forgiven his delusion”he makes his living convincing himself and others he is someone else, and his brain is riddled with oxytocin and gentleness from the recent birth of his own first son. What is unforgivable is that people believe this professional pretender, because the results are fatal: for European social stability, welfare and services, culture, but also for the migrants in question.

Kindness can kill, and anyone who denies the incredible force of the “pull” factor of such public displays of welcome has an absolute duty to explain why this migration is happening now”it’s not as though war and failed states are new”and why it is only happening toward countries famous for “caring” and not toward those who publicly just don”t give a damn.

What no one is talking about is the realpolitik result of taking this path. The post-Iraq liberal consensus is being watched by a whole variety of hostile and quasi-hostile bodies: the latter being allies when we”re strong and enemies when we”re not, e.g., Russia and China. The darker among them now know that if they can resource the arms and the sociopaths/faithful to lift them, they can take over a portion of the Earth’s surface, and not only will we fail to counter them, but we”ll even take the population they displace, thus encouraging retreat in the face of any violence.

Fighting to the death for your homeland becomes a less appealing option when even victory is vastly inferior to a state-sponsored apartment in London. This is the ugly tail end of the “pull” factor that is never discussed”it not only drowns people in the Mediterranean, but actively encourages the rise of warlords, especially favoring those who use Tamburlaine-like levels of brutality to scare any opposition into seeking refuge in the West.

If people really cared, realistically and sustainably, they”d be advocating pouring funding into maintaining education and commercial interest levels in Syrian refugee camps for when that war ends”which it will”and getting ready to send troops in afterward to keep the peace.

If this sounds like colonialism lite, that’s because it is: This tidal wave of refugees sweeping across land and ocean has given a democratic mandate better than any polling booth”they”ll risk the death of their children to live under our governmental systems here, so why not save them the trouble and institute it over there?

I”m not saying it will be easy. It went wrong many times in Iraq, and eventually we lost the will, which undeniably was a contributing factor in this crisis. I myself changed my mind on that adventure twice, and ended up in the wrong. I should have listened to Kissinger, before he changed his mind too, when he said it would tip the balance of power in the region dangerously toward both Iran and instability.