Kingship and Kinship, Nepotism and Neposchism 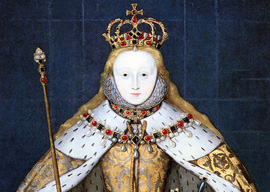 A skeleton dug up from a parking lot in Leicester, England last year was confirmed this month to be King Richard III. This provides as good an excuse as any for exploring the now overlooked but always relevant complexities of kinship.

The last of the Plantagenets ruled England until his 1485 death at the Battle of Bosworth Field fighting Henry Tudor, who succeeded him as King Henry VII.

As Richard’s supporters, the Ricardians, like to complain, history is written by the victors. And the victorious Tudors had the best writer ever, William Shakespeare, whose patroness, Queen Elizabeth I, was Henry VII’s granddaughter.

Shakespeare’s portrait of Richard as a hunchback Machiavel who ordered the murder of his own brother and two little nephews has furnished the screenplay for memorable movie versions of Richard III starring Laurence Olivier in 1955 and Ian McKellen in 1995.

Although Richard III was written early in Shakespeare’s career, it chronologically concludes his two tetralogies about English kings. The playwright much later returned to royal history to coauthor the uninspired Henry VIII, but Richard III’s death on Bosworth Field”“My horse, my horse, my kingdom for a horse””is the capstone of a vast dramatic edifice that has influenced Anglo-American thought ever since.

“The peculiar horror of when-brother-fought-brother has long been thought to have Darwinian roots.”

As the Ricardians bitterly note, Shakespeare so dominates our impressions of pre-Tudor monarchs that there is relatively little demand for fresh works of historical fiction about pre-Tudor royals.

In contrast, because Shakespeare in his prime shied away from writing in depth about Tudor history, there’s no end to new works fictionalizing the Tudors. At least since Charles Laughton won the 1933 Best Actor Oscar for The Private Life of Henry VIII, the Tudors have been depicted onscreen perhaps as often as any family in history. For example, in 1998, Judi Dench and Cate Blanchett were both Oscar-nominated for playing the Virgin Queen.

English royal history in this period is of peculiarly broad interest because it combines affairs of state, family soap opera, and violence”lots and lots of violence, but the most memorable is of the domestic variety that has fascinated audiences since Aeschylus’s Agamemnon and Sophocles’s Oedipus Rex.

Aristotle was perhaps the first to note that tragic narratives focus on family relations. A story about two strangers who fight to the death, he pointed out, is nowhere near as interesting as a story about two brothers who fight to the death. Cain and Abel, Jacob and Esau, Oedipus and Laius, Michael and Fredo, JR and Bobby, Frasier and Niles, Joseph and his brothers, Lear and his daughters, Hannah and her sisters….

The peculiar horror of when-brother-fought-brother has long been thought to have Darwinian roots. When an interviewer asked biologist J. B. S. Haldane if he would give up his life for his brother, he famously quipped, “I would lay down my life for two brothers or eight cousins.”

In the 1960s, William D. Hamilton fully worked out the math of kin selection that Haldane had hinted at: We share copies of, approximately, 50 percent of our idiosyncratic gene variants with our parents, siblings, and children, 25 percent with uncles/aunts and nephews/nieces, 12.5% with first cousins, and so forth. This helps explain nepotism: You have a genetic interest in helping your brother’s child succeed at reproducing, but less of an interest in your first cousin’s child, and even less in your second cousin’s child.

In the 1970s, Robert Trivers showed that this logic explains sibling rivalry as well. Your relatives are your most natural allies because you share more genes with them than with strangers. Yet they are also your most likely rivals for your family’s resources, such as inheritances…for example, the throne of England.

This balance between nepotism and neposchism, between sibling rivalry and sibling revelry, makes for high-stakes drama, especially when a crown is at stake. As the Earl of Richmond, soon to be the new king Henry VII, laments in the concluding speech of Richard III:

England hath long been mad, and scarr’d herself;
The brother blindly shed the brother’s blood,
The father rashly slaughter’d his own son,
The son, compell’d, been butcher to the sire….

The fascinating 2006 academic paper Culling the Cousins: Kingship, kinship, and competition in mid-millennial England analyzes two centuries of English royal-upon-royal killings from a Darwinian perspective. They count 47 homicides between members of the royal family (defined as descendants of King Edward III).