KKK is the New UFO 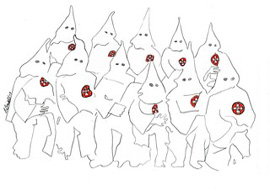 The current identity-politics hysteria was launched about a year ago (conveniently enough for the Obama reelection campaign) with the news that an angelic black baby named Trayvon Martin had been gunned down by white racist George Zimmerman.

In the latest brouhaha, Oberlin, a (very) liberal arts college outside of Cleveland, immediately shut down all classes Monday to hold a frenzied, Cultural Revolution-style rally against the rising tide of racism because one student claimed to have spied a one-man Ku Klux Klan rally on campus in the wee hours of the morning.

The past year reminds me of a similar frenzy in the early 1990s that Bill Clinton rode to the White House. Do you remember the “Year of the Woman,” in which Clinton (of all people) ran as the nemesis of bosses who make passes at the women who work for them? No? Well, since nobody else seems to remember the recent past, it’s worth mentioning how these manias seem to start up in conjunction with Democratic presidential campaigns, then sputter on for years.

“There is such a hunger in 2013 to sniff out racists and punish them that the actual shortage of racists is leading people to imagine that a girl in a blanket is a lone lynch mob.”

The Year of the Woman was kicked off 13 months before the 1992 election when the Democrats trotted out Anita Hill to accuse Supreme Court nominee Clarence Thomas of sexually harassing her back when they were bachelor and bachelorette. As far as I could tell, the two well-educated blacks would have made a well-suited couple, and, indeed, Anita remained on friendly terms with Clarence until after he married a white woman.

But to everybody else, Anita Hill’s office gossip was apparently the biggest news in world history. Or at least it was long enough to help get Bill and Hill into the White House, at which point the media’s interest in sexual harassment evaporated.

I pointed out back then that if sexual harassment consisted of making “unwanted sexual advances” to underlings, the Arkansas governor was surely”by the Law of Large Numbers”guilty and would eventually run into a scandal. Eventually he did in the Paula Jones lawsuit, which led to Monica Lewinsky and his impeachment. But by 1998, the press had forgotten all about Anita and the Year of the Woman.

Similarly, Oberlin’s ghostly KKKer is reminiscent of scores of campus hate fiascos of recent years. But who can remember anything?

While the college administration’s story of the campus Klansman has excited the national media, only two newspapers so far have bothered to call up the local cops to find out what really happened. One is the local North Coast Chronicle-Telegram of Lorain County, Ohio, which reported:

Oberlin College’s “Day of Solidarity” on Monday was sparked by a student who reported seeing a person wearing what appeared to be a Ku Klux Klan hood and robe near the college’s Afrikan Heritage House while driving through campus between 1 and 2 a.m.

College security officers responded to the area, but weren’t able to find a person wearing the infamous KKK garb.