Krazy for the Kardashians 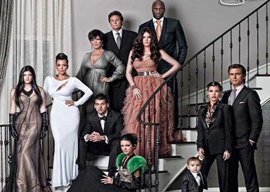 Scott recently backed out of hosting the Hamptons Golf Classic because his daughter with Kourtney K is due around the same time. He also just opened a new restaurant in New York called RYU. The food is Asian/Israeli”ever on the cutting edge! I love Disick’s sense of humor. He is particularly funny when he gets all cocky and drunk. I miss his wild drinking days when he would go to Vegas and embarrass the whole klan. He seems like a sensitive and humble person, though his humility is not always obvious. Only Disick can get away with using a cane.

One thing that confuses me is the girls” choice in men. I would think they would go for guys with origins more similar to their own, but I guess now that they are so famous they need to be with people who understand the nature of the beast and who are happy in the spotlight.

I am so glad that whole Kris Humphries nonsense is over. He was so immature and annoying. I actually stopped watching the show because of him. My skin crawls when I catch a rerun and have to listen to him acting like an awkward teenager. All the haters who said she married him for publicity are wrong. She was just caught up in a bad relationship and was consumed like most girls by her wedding fantasy. Nobody would have married that goober-faced tool for money. Only an inexperienced young woman could make such an idiotic decision.

Now that Kim is with Kanye West, I am going to have to regroup. I used to find him really annoying but I can see by the photographs that he’s really into her. I think she likes him because he’s famous and into fashion and all that, but Kim is a little too into herself right now to really know how to love anyone. I give her another five years or so to fully mature. Kim is the middle child and they are always the most screwed-up.

It couldn”t have been easy for the girls to lose their dad so young. I wonder if that’s why they all have OCD and love to keep everything tidy and under control.

Kris Jenner is the real mystery. Is she a stage mom who never realized her own ambitions, or is she only trying to secure her family’s financial future? She has to be a decent lady or Bruce Jenner wouldn”t be with her. He seems like a solid person. She is clearly very ambitious and very capable.

People love to hate the Kardashians, but I don”t see why anyone has a problem with them. The Kardashians stick together and look out for each other. They work hard. They”re honest about their values. They have never claimed to be more than they are.

They are a tight family and they don”t hurt anyone. They have been involved in so many different businesses and harmless scandals, it’s hard to keep track of the main reason they”re famous. Personally, I”d like to see them all at Coachella next year toking on doobies and singing in an ethno-Armenian gypsy band called Kim and the Kardashians.