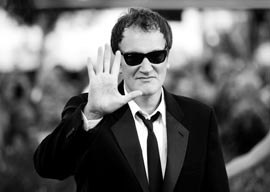 Nobody needs to tell me to boycott Quentin Tarantino.

They”ll revoke my Gen-X card for this, but I”ve always disliked his movies”or, more precisely, the inexplicable praise they”ve received for their “daring” and “originality” ever since his directorial debut with Reservoir Dogs (1992).

Look, it was good, especially for a first film, but hardly the “greatest independent film of all time.”

But the critical reaction was absurdly enthusiastic, particularly the universal admiration expressed for the opening “diner scene,” in which the assembled felons debate the “real meaning” of Madonna’s song “Like a Virgin.”

I was the bore at every party pointing out that, in fact, the pilot for Cheers a full ten years earlier saw the soon-to-be-beloved bar regulars similarly quarreling about “the sweatiest film of all time.” (Cool Hand Luke won out, as I recall.)

When cornered, I”d spit out a Tarantino-themed variation on David Lee Roth’s (unfair in retrospect) line about why rock critics loved Elvis Costello so much.

I put off seeing Pulp Fiction (1994) as long as possible, until my then boyfriend and I found ourselves with nothing better to do one evening. Plus, I was forced to admit that I couldn”t continue to consider myself a pop culture buff if I didn”t see the damned thing, now that it had been Oscar-nominated for Best Picture (!) and was being called the movie “that changed the face of modern cinema.”

I”ll admit it: I”m temperamentally calibrated to hate whatever everyone else loves. But my then boyfriend was not. Yet he was the one who started it. We”d already exchanged puzzled glances after everyone except us laughed uproariously at the “Royale with cheese” line”the humor of which, to this day, despite my fervent and sincere pleas, no one has been able to explain to my satisfaction.

Then, during another scene, he leaned over to me, nodded in the direction of the screen, and whispered, “He’s gonna say he hid the watch up his ass.”

(And how the watch owner kept it up there if he”d had dysentery doesn”t interest the great screenwriter Tarantino, obviously. I suspect”hat tip, Steven Sailer“he didn”t quite know what dysentery was, but it sounded apt. Tarantino is, after all, the same “genius” who doesn”t know the dates of the Civil War.)

We went back and forth like that for the rest of the film:

Pulp Fiction‘s “innovative” “playing with time”? Er, La JetÃ©e, anyone? All those narratives coming together at the end? Uh, how’s about every horror omnibus ever, but Dead of Night in particular?

Years later, having married a World War II buff, I was matrimonially obligated to sit through Tarantino’s Inglourious Basterds. Again, Tarantino’s ingenuity was applauded: Imagine! An alternative history in which Hitler is assassinated! Yes, who would have conceived of such a thing”except, of course, the 35-odd folks who tried to kill the guy in real life, and the untold millions who”ve fantasized about it from around 1935 up until, hey, look: this week even?

So the cops can form a line behind me.