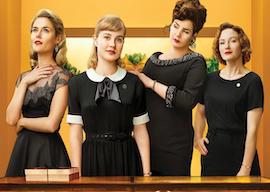 Should art mirror the world as it is, or does an artist fail the public if the work goes back in time, before the grotesqueries of the present? Back, back, I say, but that’s to be expected. I’m such a fan of the past that if I could have one wish granted by Takimag, it would be for a review by William Dalrymple of the most uplifting movie ever, Ladies in Black, directed by the great Australian Bruce Beresford.

My, my, what memories of Australians and Oz it brought back: the great Lew Hoad, Mervyn Rose, Roy Emerson, Neale Fraser, Ken Fletcher, all great tennis players and good friends, and Sydney circa 1959, like a picture postcard from back then, not a single detail missing—large yellow cars, pith-helmeted traffic cops, two-tone shoes, vests, and hats included. Yes, I admit the nostalgic glow got to me like never before, but Beresford’s film is such a visual triumph, coupled with a story of coming of age both beautifully and tastefully told, that I remained seated in my bedroom after the end for fifteen minutes, in awe. That night I couldn’t sleep trying to figure out what happened, and why the world is so dreadfully different today.

There is nothing in it that’s dark, warped, or contemporary, nothing sick, which will probably turn it into a money loser in the U.K. and the U.S. of A. The degradation deposited on us by the film industry reflects today’s world of drugs and freak sexual mores and lifestyles. Oh yes, and we are not allowed to say things anymore that might offend anyone, including mass murderers who kill in the name of Allah. Militant secularists make sure we never say anything nice about Christianity, especially the Catholic Church, and God forbid we portray on film or on the printed page anyone of virtue and moral discipline. No wonder I was thunderstruck by Ladies in Black.

“The movie ended with me stunned and wishing it was 1959 all over again.”

These ladies are shop assistants in a grand Sydney department store, the fictional Goode’s, and they include the most delightful and wholesome Angourie Rice and the beautiful Rachael Taylor. The movie was made this year, I think, and it makes Frank Capra’s It’s a Wonderful Life seem a downer by comparison. The teenage Miss Rice has a mother who adores her and a gruff father who works as a printer for the Sydney Morning Herald paper and doesn’t understand the modern world. Remember it’s 1959, pre–everything that’s horrible like the internet, Facebook, Twitter, computers, mobiles, selfies, the f-word, promiscuity, rap, leggings, porn, and the E.U. The teenager is divine and a top student. Her smile is to die for. She also works at Goode’s, and comes under the watchful eye of a Hungarian lady—once grand—looking out for her. She gets her to be prettier and prettier by showing her how to dress better and how to manage her hair. Overnight she becomes a rare beauty, always smiling, always happy and divine. Her mother is over the moon. The father is not so sure.

The Hungarian lady is married to a Hungarian gent who has a friend who is looking for female action. The friend is smooth but not a smoothie. Introduced to another lady in black, Rachael Taylor, he flirts like the charming Mittel-European he is, complimenting, dancing, charming her, exclaiming his love for the open spaces of Australia. He asks the beautiful Rachael if she prefers Liszt to Bach. She hesitates, not ever having heard of either, and he proceeds to teach her. They fall in love and she confesses to having had an affair. He laughs and tells her it’s okay.

The Aussies at first look upon the Hungarians as strange creatures. They have wonderful formal manners and talk about the grand old days, not with bitterness but with happiness. They charm and civilize the Aussies. They drink wine and even teach the gruff father of the teenager how to drink it instead of beer. Now, I have yet to meet a Hungarian I didn’t like—I’ve never met the ghastly George Soros—and in the movie the foreigners come up aces. Their sophistication coupled with their love of life seduces the Aussies. There is a very happy ending: The teenager wins a scholarship to university, Rachael gets engaged, the gruff father loves wine and other Hungarian delicacies, and the movie ends with me stunned and wishing it was 1959 all over again.

If movies educate the masses, no wonder we’re in such a mess. Nowadays the f-word is ubiquitous in every cool person’s conversation, and things have gotten so out of hand, there were cretins who recently expressed sympathy with some Manson murderers simply because they were women. Movies today thrive on violence, swear words, and loathing of traditional bourgeois values. It is a world of misogyny, toxic masculinity, and white male privilege. No wonder ethnic minorities feel aggrieved. All they have to do to feel like that is watch today’s movies. When I watched Ladies in Black, it reminded me of my own family. All my grandchildren and children do is make fun of (a) me and (b) each other. We laugh and laugh and love each other, and now that I have given what I got from my father to them—and beg them at times for cigarette money, always refused, then money for a mistress or two, refused with insults—I am reminded of the closing scene of Ladies in Black, and the happiness that wins out. More films like it, please.