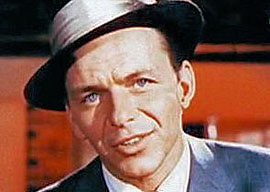 JFK was practically a member of the Rat Pack, one of the few men for whom Ã¼ber-alpha Sinatra ever eagerly slaved as a beta-male drone: as procurer, of course”the Treasury Department didn”t dub Kennedy “Lancer“ for nothing”but also in the lesser-known (and ultimately thankless) role of party planner.

For it was Sinatra who stage-managed JFK’s glittering inaugural gala, and established the event’s modern-day star-studded prototype”unfortunately. Thank Frank for the low-grade-fever-ish babbling about who will and won”t and shouldn”t and should show their faces at Trump’s swearing-in soiree.

I won”t pretend I was thrilled when the first “stars” confirmed for the Donald’s big day were the Rockettes and the Mormon Tabernacle Choir. Unless the latter are going to provide musical accompaniment for the former, that booking harks back to the overnight lineup for, say, the Jerry Lewis Telethon circa 1972″confirmation of The Bumpkining ascendant.

Then again, why should I, or anybody, care so much? Who sang at Reagan’s first ball, or Clinton’s second? Me neither.

“Would Sinatra sing (and vote) for Trump were he alive? Unquestionably.”

And we know A-listers helped lose the election for Hillary Clinton, so at this juncture”especially post-Streep”celebrities are basically typhoid kryptonite with AIDS, but admit it:

It still stings that our side can”t command the same superstar power as the Dems.

But what if, in this undeniably pivotal time, this is the year that ends, too? Our caring, that is?

Nixon didn”t catch so much as a contact buzz of cool from his audience with Elvis; if anything, that meeting with the past-his-prime King diminished both men. We should have learned then that the game was rigged, by the Hollywood legend machine, partisan courtiers (see “JFK,” above), Playboy, The New Yorker, Esquire, Rolling Stone, and the other self-appointed tastemakers.

Trump’s win dealt them and their descendants a helluva blow, but they”ve got the freakish strength of drowning men. Broadway’s Jennifer Holliday, who’s sung for other presidents, of both parties, was bullied into backing out this time.

(As far as those elites are concerned, confirmed performers Lee Greenwood and Toby Keith“despite having sold tens of millions more albums than, say, Kanye West”are just country stars, so they don”t count.)

Paul Anka was set to perform a bespoke version of “My Way“”cringingly corny but also perfect”but “had to cancel due to a scheduling change in an ongoing custody case for his son.” (If the mother is the broad he wrote “Having My Baby” about, then I think we can all forgive her intransigence…)

Anyhow: Would Sinatra sing (and vote) for Trump were he alive? Unquestionably.

The son of a Hoboken Democratic fixer, Sinatra campaigned for FDR, naturally”but was also one of millions who made the leap from left to right when Reagan ran. Whether or not his defection was philosophically motivated, or reflected his desire to remain in the orbit of power, even his closest associates or most insightful biographers aren”t entirely certain. Another chapter in the life of Francis Albert Enigma.

But consider the evidence: Here are two paradigmatic New Yorkers who brawled their way to the top; tabloid liaisons here, a trio of devoted children there; men of eye-watering generosity (you”ve heard the “we”ve paid off your mortgage” story by now) and spleen (the name of Sinatra’s record company, Reprise, was pronounced with a long “i,” as in “reprisal”).

Note, too, the almost belligerent philo-Semitism: In 1948, as a favor to a stranger he met in a bar, Sinatra couriered a million dollars cash to a ship full of arms earmarked for Israel, docked at a New York pier; Trump, dead set on making Mar-a-Lago nonrestricted, taunted Palm Beach’s town council by sending them copies of Guess Who’s Coming to Dinner.