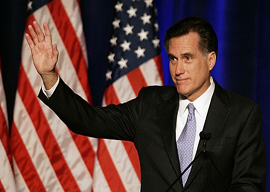 Mitt Romney declared his intention last week to seek the Republican Party’s nomination for president in 2012. Between now and next summer’s convention, he’ll trip along the Yellow Brick Road that he must imagine will lead him to the White House. That means fifteen months of making promises no one expects him to keep, chomping on fried chicken in Alabama and dim sum in San Francisco, coining empty slogans, pandering to people he would never invite to dinner, kissing a few thousand drooling babies, and, if he is astute, keeping his hands off the posteriors of the free labor that flocks to his colors.

Yes, ma’am, it’s election time in America. It’s the longest season of the quadrennial calendar, and Mitt will tack on an extra three months if he takes the nomination. The going rate for the full campaign must be about $50 million a month. Those with access to the hundreds of millions it takes for advertising to fool the voters are either up and running or making it clear they’re about to be: Sarah Palin, Tim Pawlenty, Herman Cain, Newt Gingrich, Ron Paul, Michele Bachmann, and someone from Utah named Jon Huntsman. I assume no Democrat will be brave or foolhardy enough to challenge Obama.

Republican primary and caucus voters will be asked by all of the candidates to trust them to overthrow the last guy for whose banter we fell. This is what Americans call democracy, and it is no recipe for putting the most qualified, public-spirited, and honest people into office. It instead guarantees chicanery, mediocrity, and larceny.

“American democracy is competing with the dollar for loss of value.”

Why does Mitt Romney excite us less for 2012 than Harold Stassen, who sought the Republican nomination eight times without coming close, did in 1964? At the ’64 convention at the Cow Palace near San Francisco, I remember delegates sporting jocular lapel buttons that said, “Stop Stassen.” Perhaps Mitt will achieve similar status if he persists every four years in his quixotic quest to make himself leader of the free world. A few people talk about Jeb Bush, as if two Bushes in the White House had not already created a surplus. I’ll leave Sarah Palin to Tina Fey, and most of the others couldn’t run a gas station. If Obama fell under a bus, the Democrats wouldn’t field a much better roster. American democracy is competing with the dollar for loss of value.

The 2012 Republican nomination derby, with its lame horses and crooked jockeys, will drag on for the next fifteen months of ennui, deception, and occasional scandals. The crown won’t go to anyone who cannot or will not pay the entry fee. It debars those who will not guarantee their financial backers rich rewards and bailouts from the public purse or soften up the public with promises of chickens in every pot. Thus, the voter is offered only those with the morals of US Congressmen or Colombian drug dealers. And I’m being unkind to the Colombians. Does it matter that the finest thoroughbreds are never in this particular race?