Language as an Assault Weapon 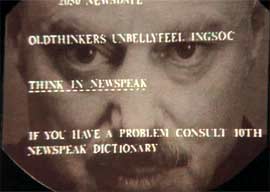 Come now, all ye tired, poor, and huddled masses of illegal immigrants and bomb-tossing Islamists”according to the Associated Press Stylebook, you don”t even exist anymore. Despite the fact that you are now officially unpersons, America’s useful idiots and dhimmis-to-be welcome you to our fatally tolerant nation and hope you have a pleasant stay.

Last Tuesday, AP Senior Vice President and spokesvagina Kathleen Carroll announced that her organization “no longer sanctions“ the term “illegal immigrant” to describe those who”ve, well, migrated to the country illegally. This was despite the fact that the AP affirmed usage of the term as recently as November 2011. Any suggestions that the AP’s sudden turnabout is related to recent announcements that a bipartisan Congressional group expects to push forth the soft, vague, intangible term “immigration reform“ by the end of this week will be dismissed as bias, conspiracy theorizing, and, sure, what the hell, “hate speech.”

Paying apparently no mind to the feelings of those who were born here or who applied for citizenship legally, Kathleen Carroll argued that “illegal immigrant” is a term that “dehumanizes” those toward whom it is applied, and we”re all aware under threat of extreme censure that feelings are more important than facts, especially for an objective news agency. The Congressional Hispanic Caucus praised the AP’s decision, although it would be bigoted to suggest that such an organization suffers from bias. And one must never ponder whether such immigrants, legal or not, don”t yearn to assimilate rather than rain suffering and racial vengeance against those whom they perpetually accuse of racism in order to crowbar their way into our milk and honey.

“This is not the first, nor the thousandth, time that the Associated Press has been accused of bias.”

On Thursday, hot on the heels of those suddenly nonexistent illegal immigrants, the AP counseled that the term “Islamist“ should no longer be used to describe “Islamic fighters, militants, extremists or radicals, who may or may not be Islamists.” Never mind that in a sane world that was actually concerned with semantic precision, “Islamist” would refer to anyone who adheres to Islam, much as “Buddhist” refers to those who follow Buddhism. But again, we wouldn”t want to besmirch anyone who may literally seek to subvert and eventually destroy our civilization by use of force. The Council on American Islamic Relations (CAIR), who had lobbied the AP to make the change, gave a high-five to Allah in response.

This is not the first, nor the thousandth, time that the Associated Press has been accused of bias. A 2008 statement by AP Washington Bureau Chief Ron Fournier that he planned to steer news coverage toward “sharp, edgy analysis” that would “stick it to somebody who deserves it” suggested that the AP was slaloming down the slippery slope from objectivity to advocacy. And a 2011 internal memo from the AP encouraged a new style of “journalism with voice…with more interpretation” that through the magic of doublespeak “does not mean that we”re venturing into opinion, either.”

A huge quotient of the seemingly endless cultural and ideological wars hinges on how terms are defined. Those who claim authority to declare what words mean are able to shape public thinking like a sculptor molds clay. Although facts”which are what news organizations are supposed to peddle”seem immutable , words are forever in flux. Both “liberal“ and “progressive“ now mean almost the opposite of what they did a century ago. Such semantic squabbling also leads to absurdities such as how the phrase “colored person” was deemed hateful and replaced with the far more sensitive “person of color.” Terms such as “racist” are almost never applied to nonwhites, and if you dare tell a militant feminist that she’s “sexist,” she may scratch out your eyeballs. And don”t even dare to ask for a quantifiable and consistent definition of “Semite” lest you be deemed “anti-Semitic.”