Last Call at the Milk Bar 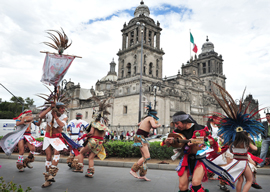 I”m being a pain in the ass again. My childhood makes me do it. When I was 11, we boy kids in Alabama liked to shoot a wasp’s nest with BB guns and run like hell. I guess it stuck.

In this column I will explain why the Caucasian race will shortly be extinct, and why it is a good idea. This conclusion flows ineluctably from evolutionary considerations and studies of racial IQ. It is simple biology.

Here’s the evolutionary-IQ perspective: As race realists have argued at length, IQ is a reliable measure of intelligence, and is primarily genetic. Twin studies, in which identical twins have been raised apart in differing environments, show that 80% of IQ is of genetic provenance. So far as I know, these studies seem to be correct.

The realists frequently publish curves of IQ distributions indicating that American blacks have a mean IQ of 85, Mexicans of 87, and white Americans of 98. (IQs tend to wander according to the argument one is making. For national averages I mostly use the figures in the table from IQ and the Wealth of Nations, regarded as canonical by race realists.) The authors who have discovered the superiority of whites, curiously enough, are white. As a rule, realists attribute almost every instance of high intelligence to genetics and, usually, to white blood.

“When I mention Mexico, I invariably get mail instructing me on the nature of the county and its inhabitants. Everybody seems to know more about Mexico than those of us who live here.”

The accuracy is doubtful. In particular, they omit distributions of groups superior to plain vanilla whites (PVWs). For example, the slant-eyed Asians”Japanese, Chinese, and Koreans. Their IQs, 105 to 108, are greatly superior to that of PVWs. Note that these Asians make up the first five countries by IQ in IQ and the Wealth. (China, mysteriously, is put at 100, but since Singapore, which is genetically similar, is given as 108, this would seem the best figure for developed Chinese societies.) There are well over a billion such Asians.

This is no statistical fluke. They are so overwhelmingly dominant in high-end universities (Caltech, 40%) that Ivy schools have quietly imposed quotas to protect PVWs”i.e., affirmative action for the non-competitive. Asians have larger brains, which perhaps explains their superior intelligence.

In short, these Asians are genetically superior. (And they know it. An acquaintance with access to the Asian community of California quoted them as describing whites as “lazy and stupid.”) By inevitable natural selection, they are beginning to replace PVWs in evolutionary niches requiring intelligence, as Cro-Magnons replaced Neanderthals.

Think I”m kidding? Here are some United States Math Olympiad winners. The proportion of Chinese names strongly suggests that the true Chinese IQ is well ahead of that of PVWs. Asians make up something like 6% of the U.S. population. Uncle Darwin is calling us to bedtime.

Non-Chinese Asians outperform whites as well. Thirteen of the last 17 winners of the Scripps National Spelling Bee have been Indians, who represent a tiny fraction of the U.S. population. Indians, says IQ and the Wealth, have a mean IQ of 81. Sure, and I”m Sophia of Anhalt-Zerbst. A common response of race realists is that only very bright Indians come to the U.S. Yes, but all the very bright American kids are already here, no?

Another group that’s even more genetically superior to plain vanilla whites is the Ashkenazi Jews: mean IQ 111, 13 points ahead of PVWs. That is, the gap between the Ashkenazim and PVWs (which means, for most readers, us) is greater than the eleven-point difference between PVWs and Mexicans. Because of the workings of a normal distribution, the consequences of those 13 points are great. For example, Nicholas Wade, a genetic determinist, points out in A Troublesome Inheritance: Genes, Race and Human History that proportionally these Jews produce about six times as many people above IQ 140 than do PVWs. The ratios grow at higher IQs.

This is huge. If you look at intellectual achievement, Ashjews are way, way ahead of PVWs”Nobel prizes, chess champions, hugely major scientists. By comparison, plain vanilla whites are just, well … how to put it? Not very bright. Careful examination shows that an imposing part of what we think of as white European achievement is actually Jewish achievement.

Into the Darwinian night. We whites had a good run. The reality of IQ shows that the world is moving on.

Now let’s look at things from a non-IQist perspective. There is no biological reason to believe that one genetic group cannot be more intelligent than another. There is a great deal of reason to wonder whether IQ is a good measure of intelligence between disparate groups, and whether IQ”the answer on the test”is genetic.

Many people are quite sure of the answers, but often have little grasp of the material. I spent years on Steve Sailer’s human-biodiversity list, a conclave of minds whose great power was matched only by their inelasticity when it came to IQ and evolution. I was astonished at their capacity to ignore unwanted evidence, abandon logic, and find pat genetic explanations for everything, probably including sunspots. Contradictions abound, like picnic ants on a half-eaten sandwich, as for example the many large differences in IQs between genetically identical groups. (Readers wanting a detailed analysis should read this, by Ron Unz.)