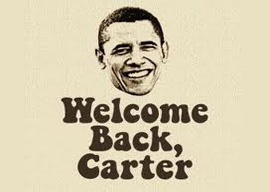 Both the 20th and 21st centuries have seen failed presidencies.

William Howard Taft lost in 1912, though he might have retained office had not his old friend and former leader Theodore Roosevelt run as a third party Bull Moose candidate and won more votes than Taft.

Herbert Hoover failed through no fault of his own. The Crash of 1929 and the Great Depression were beyond his control, and every remedy he tried failed adequately to work.

Had the popular Cal Coolidge sought a second full term in 1928 instead of declaring, “I do not choose to run,” he would have been in the White House when the crash came and cast by history in the role assigned to Hoover.

But, as one wag said, Silent Cal’s career seems to have been a product of repeated celestial interventions.

By 1952, Harry Truman was a failed president. His approval rating was below 25 percent. Chiang Kai-shek’s China had fallen to communism. Josef Stalin had stolen the secret of the atom bomb through espionage against the United States. Truman had fired Gen. Douglas MacArthur and was in the third year of a Korean War he could neither win nor end.

“The one sure way Obama can win is to convince a nation ready for change—to fear, loathe and recoil from the proposed agents of change.”

The administration had been exposed as shot through with corruption and treason in the persons of Alger Hiss, Harry Dexter White and the Rosenberg atomic spy ring, among others.

Rejected in New Hampshire, Harry wisely chose to pack it in.

Lyndon Johnson, his 44-state landslide in 1964 and Great Society notwithstanding, was by 1968 a failed president being repudiated in the primaries of his own party.

Truman and Johnson quit rather than run again and risk defeat.

But Jimmy Carter, whose poll numbers fell as low as Truman’s and who was widely seen as a failed president, chose to fight Teddy Kennedy in the primaries and Ronald Reagan in the general election.

Carter had one signal achievement: the Israeli-Egyptian peace treaty.

But by 1980, he was presiding over an economy with 21 percent interest rates, 13 percent inflation and zero growth. The Soviet Empire had annexed Afghanistan and was on the move in Africa, the Caribbean and Central America. Iran had fallen to the mullahs. Fifty American embassy personnel were being held hostage in Tehran.

What makes that 1980 election relevant is that it was the last national election and the only postwar election where a Democratic president widely perceived to have failed chose to run for re-election.

And what strategy did the Carter campaign adopt?

They sought to demonize Reagan as a tool of the rich, a cold-hearted wretch who would savage the safety net, a crazed anti-communist Cold Warrior whom it would be dangerous to entrust with nuclear weapons. Ronald Reagan was Barry Goldwater redux.