Last Stand Against the Racial State 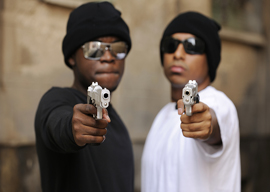 “But why would any white guy want to say “nigger”?” My perpetually outraged white leftist friend was, to nobody’s shock but hers, outraged after viewing a thread on my Facebook page in which some fellow I don”t know made a comment about the dreaded “N-word.” He was recycling an old argument about how “blacks call themselves that every day of the week…whites get fired for using the word…unfair, unjust, blah blah blah.” It’s not exactly a revolutionary sentiment, at least not among alt-righters.

And neither was my friend’s indignant reaction; it was the standard cut-and-paste reply that I”d expect from anyone on the left.

I explained to her that it’s not so much a matter of wanting to be able to walk down the street yelling, “Howdy, nigger” to every black person you see. There may be one or two “1488″ types who”d love to be able to do that, but these days the average rational white guy doesn”t go through life fighting back the urge to tell the mailman, “Here’s your Christmas tip, nigger.” What concerns me is that white people have been attacked for using the word (or even less offensive variations) in cases in which its use was legitimate. If a black person includes “nigga” in the lyrics of a rap “song,” everyone should be able to sing it. If a black dude puts “nigga” in the name of his band or the title of an album, a white person should be able to ask for it by name at the record store (yeah, I know; album, record store…dated references, but you get my point).

It’s one thing to be discouraged from using racial epithets in a hostile or aggressive way; we should all be discouraged from doing that, regardless of race or ethnicity. But what makes me uncomfortable is the fact that, more and more, we”re creating a tiered system of allowable speech, where white people are punished for uttering a word or expressing a thought that is not in and of itself racist, but only considered racist because of the skin tone of the speaker.

The “social justice” left is following in some very big jackboot footsteps in its pursuit of a society in which “allowable” speech is determined by race, ethnicity, or ancestry. The two most memorable racial states of the 20th century”Nazi Germany and apartheid South Africa”had a myriad of rules and regulations, covering pretty much all aspects of human activity, in which what citizens were allowed to do was based upon looks and bloodline. Under apartheid, the sheer number of recognized racial and ethnic classifications was ridiculous, and each grouping brought with it a different level of approved behaviors and actions.

“It was never about the content of Bell’s comments; she merely had the wrong skin tone to make them.”

In theory, leftists ought to be against that type of nonsense. But of course, we all know that’s not the case. Leftists are pursuing a “new, improved” racial state in the West, in the name of revenge. Whites “have it coming” to lose rights because in past centuries people who had skin that is somewhat light created racial states that oppressed people with skin that is a bit darker, so of course the way to remedy that”decades, indeed centuries, after the fact”is to take people whose skin resembles the skin of oppressors long dead and say, “Hah, how do you like it? This”ll learn ya!” And people whose skin resembles the skin of those oppressed in centuries past will gain self-esteem from the racial vengeance and stay in school, stop killing each other in gangs, go to college, and become doctors and rocket scientists, and one day we”ll cure cancer and have colonies on Mars. But the first step to living tumor-free in outer space is regulating the speech of white people.

Idiotic as that sounds, that truly is the left’s vision. A new racial state is needed, because”the reasoning goes””people of color” are not only owed for historical slights, but genuine equal rights”the kind I was taught about in school during the 1970s, in which nobody gets discriminated against based on skin color”are actually a tool of oppression that keeps nonwhites down. Today’s racial state is cool because it’s positive racism, racism for a cause, “Racism for the Cure” (to all that ails nonwhites). It’s genuinely frightening how dedicated leftists are to their vision of a racially tiered West.

But there’s a lawsuit making its way through the courts at the moment that might be a last stand against the left’s twisted ambitions.

Remember Wendy Bell? She was the Pittsburgh anchorwoman who was fired earlier this year for a Facebook post in which she speculated about a horrific crime that took place in the borough of Wilkinsburg: Several gunmen descended upon a backyard cookout and brutally murdered six people (including an unborn child). The victims were all black. Wilkinsburg is 67 percent black. Basically, thugs shot up a black gathering at a black cookout in a black part of town, and on her Facebook page, Bell speculated that the gunmen were most likely black.

So of course she was fired, even though not one sonofabitch who called for and championed her dismissal doubted the accuracy of her assumption. Bell was fired because she’s a white woman. A black person could have speculated as Bell did and that would have been A-OK. But even though Bell came to the same conclusions as her critics, and”indeed”police detectives, who instantly began investigating the crime as a local dispute involving black culprits (there were plenty of witnesses to the crime, and none reported that the gunmen were white, something that would have stood out in that neighborhood), she was not only fired but ridiculed again and again and again, not for the content of her remarks but for the color of her skin. Every lyncher calling for her head mocked and criticized her for her race. She had said something a white person isn”t allowed to say.

When the suspects in the shooting were arrested, and they turned out to be (drumroll) black, there were no apologies, no offers of rehiring. Because again, it was never about the content of Bell’s comments; she merely had the wrong skin tone to make them.

In her post, Bell was hardly celebrating the presumption that the killers were black. Indeed, she saw it as tragic:

You needn”t be a criminal profiler to draw a mental sketch of the killers who broke so many hearts two weeks ago Wednesday. I will tell you they live within 5 miles of Franklin Avenue and Ardmore Boulevard and have been hiding out since in a home likely much closer to that backyard patio than anyone thinks. They are young black men, likely teens or in their early 20s. They have multiple siblings from multiple fathers and their mothers work multiple jobs. These boys have been in the system before. They”ve grown up there. They know the police. They”ve been arrested. They”ve made the circuit and nothing has scared them enough. Now they are lost. Once you kill a neighbor’s three children, two nieces and her unborn grandson, there’s no coming back. There’s nothing nice to say about that.

Is that racist? Or just truthful?