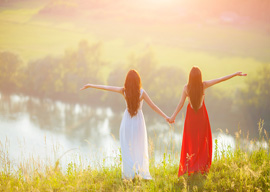 Remember when “Stella got her groove back””and the dude of her dreams turned out to be on the down-low? Well, there’s something in the Million-Selling Lady Memoirists water, and that something”teh gay!”has struck again.

Elizabeth Gilbert is its latest casualty. In 2006, Gilbert rocketed from top-tier magazine freelancer and crafter of Pushcart Prize fiction to Oprah-regular secular sage when her memoir Eat, Pray, Love became a cultural phenomenon.

The book, subtitled One Woman’s Search for Everything Across Italy, India and Indonesia, struck millions of yearning female nerves”a kind of Seven Storey Mountain for the menstrual set.

In fact, so many women replicated Gilbert’s dump-your-family-and-find-yourself quest that she cannily turned their adventures into…another book with her name on it.

As tsk-worthy as I find all those other silly broads, I can”t help but admire that about Gilbert herself: She’s a cannily ambitious, hardworking writer, whereas most women are lazy flakes, and most women writers lack Gilbert’s naked drive and coziness with self-promotion.

I can”t say I”m a fan of her actual prose, though, because I”ve never read her books and don”t intend to.

That’s not snobbery, quite; I”m an unabashed fan of pulp extractors Helen Gurley Brown and Jacqueline Susann (see: “naked drive,” etc., above). It’s just that, unlike the unchurched masses who shoved Eat, Pray, Love into their “God-shaped holes,” should I crave a dose of “female spiritual autobiography,” I can simply pull Simone Weil, Etty Hillesum, or one of the three T(h)eresas down from those same bookshelves.

“If, as we”re constantly being informed, sexuality is fluid, then mine most resembles a stagnant swamp.”

If Elizabeth Gilbert’s dilettantish “New Age spirituality” wasn”t repellent enough, her wanderlust and bottomless appetites for foreign food and no-strings sex were a bigger turnoff. On the subject of travel, I agree with Pascal that “All of humanity’s problems stem from man’s inability to sit quietly in a room alone.” And I”ve bored regular Taki’s readers already with my views on eating and promiscuity.

And then, reader, she married him. Jose Nunes, that is, the suitably exotic fellow Gilbert had bedded in Bali, then memorialized in her book.

Predictably, she pivoted, putting out Committed: A Skeptic Makes Peace With Marriage quickly enough to stanch excessive bleeding from her disillusioned, aspirational fan base.

Which brings us to this July, when Gilbert announced (after the 10th anniversary of Eat, Pray, Love and attendant “special editions” and public appearances, natch) that she and Nunes had split.

Those who”d lived vicariously through this “romance of the decade” reeled, while some of us soaked in schadenfreude.

Then last week came the kicker: At 47, Gilbert has left her swarthy “soul mate” for”another woman, a longtime friend, in fact, who is dying of cancer.

Even in this, many fans proved remarkably resilient, putting a stoic spin on this sunk-cost fallacy made flesh:

It seems you and your life have been put on this earth to be our unfaltering beacon, our truth-giver and our steady guide. Ever since Eat, Pray, Love, you”ve been an inspiration.

The Guardian‘s approving reaction put in that late-onset lesbianism is some sort of menopausal fad, citing, among others, the unsurprising example of the author of Fat Is a Feminist Issue. (Bizarrely, the same week the Gilbert story broke, one of Adam Carolla’s podcast guests was a comedian whose mother, having reached a certain age, had left his father for a woman too.)