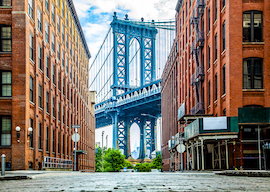 There are reasons I don’t like to venture from the Upper East Side. I was reminded of several at a dinner party in Brooklyn where I wisely kept my mouth shut as my tablemates spewed errant nonsense on myriad subjects.

The host, one of my more liberal classmates at Yale, gathered the six of us together at a gastropub in Park Slope where the menu bragged about its locally sourced, organic, cruelty-free ingredients.

As I sipped my first gin martini, on the rocks with a twist, I thought of Charlie the Tuna: “I don’t want tuna with good taste, I want tuna that tastes good.”

After the standard Trump-trashing and hopes for impeachment one hears at every sophisticated Gotham gathering, one fellow talked about a documentary he is making on the mythology of ancient Ecuador.

Of particular interest is the image carved in stone of a serpent exiting the mouth of a hybrid bird/lion/man, he said. “If you dreamed that dream, what would it mean?” he asked.

“I don’t think it’s fair for any human to become plural.”

Before I could say, “Indigestion,” he said the image welled up from the collective unconscious of mankind. “They are inherited potentials—the psychic equivalent of instincts.”

He went on and on, and no one could interrupt, before he concluded: “One day Pre-Columbian art will take its rightful place with ancient Greek, Roman, and Oriental art. Our documentary is dedicated to advancing that outcome.”

Don’t hold your breath. I understand the yearning to believe that art and culture existed in the Andes 3,000 years ago, just as it did in the African nation of Wakanda—oh wait, that was just some Hollywood mythmaking in Black Panther.

But all civilizations are not created equal. The ancient Greeks and Romans had real art, science, and literature. The headhunters in Borneo, cannibals in the Congo, and ancient goldsmiths of Ecuador did not.

The documentarian had barely paused for breath when the woman to his right started talking about how great it was that a nonbinary “genderqueer,” Asia Kate Dillon, has a big role as hedge fund manager Taylor Mason on Showtime’s Billions.

All the characters on the show refer to Taylor as “they” and “them,” as they, meaning Dillon, want, or should that be wants?

I find this ridiculous. Dillon can be a he, or a she, or an it, but I don’t think it’s fair for any human to become plural. “They” is a crime against grammar and common sense.

We have to stand up to bullies, and insist on singularity. But I certainly didn’t share those thoughts to be attacked as a Neanderthal. I had another forkful of kale.

Our host quickly changed the subject to Maureen Dowd’s brilliant interview of Tom Ford, proving that her talents are being wasted on covering politics.

Dowd revealed that Ford learned he was gay as a college freshman when Andy Warhol took him to Studio 54, where he snorted coke, drank booze, and had sex for the first time with a man.

We also learned that the handsome fashion designer is so vain that he won’t attend Barry Diller’s pre-Oscar picnic because he doesn’t like to be seen in daylight. He hates overhead lighting, and has a special table at Sunset Tower where a special switch turns off the hated illumination.

At Ford’s ranch in New Mexico, the tractors are painted black to color-coordinate with his Black Angus steers and his black horses.

As the late Karl Lagerfeld once said, “I’m very much down to earth, just not this earth.”

By now, a third bottle of wine was being poured, and the woman to my left was complaining about some floozy who had recently hit on her husband.

“She wasn’t wearing any underwear. She was showing him her vagina,” the wife said. “That’s an exaggeration,” the husband protested.

If it were me, I would have smiled and sniffed a finger, but that’s why I’ve been divorced three times. Don’t come to me for marital advice.