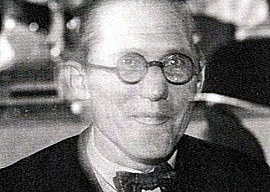 Some time ago, I was asked to review a vast biography of Bertolt Brecht, the German playwright and poet, by an admirer of his work. It is seldom that one reads hundreds of pages about someone without coming across a single instance of a decent, kind, or selfless act, but so it was with Brecht. He couldn’t even be bothered to wash for the convenience of others.

The French fascist architect Charles-Édouard Jeanneret, better known as Le Corbusier, was another of this charmless ilk, though cleaner than Brecht (a Marxist, the latter’s decision not to wash was his tribute, albeit not a very flattering one, to the proletariat). Jeanneret’s inhumanity, his rage against humans, is evident in his architecture and in his writings. He felt the level of affection and concern for them that most people feel for cockroaches.

Like Hitler, Jeanneret wanted to be an artist, and, as with Hitler, the world would have been a better place if he had achieved his ambition. Had he been merely an artist, one could have avoided his productions if one so wished; but the buildings that he and his myriad acolytes have built unavoidably scour the retina of the viewer and cause a decline in the pleasure of his existence.

“Like Hitler, Jeanneret wanted to be an artist, and, as with Hitler, the world would have been a better place if he had achieved his ambition.”

One of Jeanneret’s buildings can devastate a landscape or destroy an ancient townscape once and for all, with a finality that is quite without appeal; as for his city planning, it was of a childish inhumanity and rank amateurism that would have been mildly amusing had it remained purely theoretical and had no one taken it seriously.

A book has just been published—Le Corbusier: The Dishonest Architect, by Malcolm Millais—that reads like the indictment of a serial killer who can offer no defense (except, possibly, a psychiatric one). The author shares with me an aesthetic detestation of Jeanneret, and also of his casual but deeply vicious totalitarianism; but, unlike me, the author both has a scholarly knowledge of his subject’s life and writings, of which the perusal of only a few has more than sufficed for me, and is a highly qualified structural engineer. Mr. Millais is able to prove not only that Jeanneret was a liar, cheat, thief, and plagiarist in the most literal sense of the words, a criminal as well as being personally unpleasant on many occasions, but that he was technically grossly ignorant and incompetent, indeed laughably so. His roofs leaked, his materials deteriorated. He never grasped the elementary principles of engineering. All his ideas were gimcrack at best, and often far worse than merely bad. To commission a building from Jeanneret was to tie a ball and chain around one’s own ankle, committing oneself to endless, Sisyphean bills for alteration and maintenance, as well as to a dishonest estimate of what the building would cost to build in the first place. A house by Jeanneret was not so much a machine for living in (to quote the most famous of his many fatuous dicta) as a machine for generating costs and for moving out of. In the name of functionality, Jeanneret built what did not work; in the name of mass production, everything he used had to be individually fashioned. Having no human qualities himself, and lacking all imagination, he did not even understand that shade in a hot climate was desirable, indeed essential.

By rights, every architect, town planner, and structural engineer in the world ought to have a copy of Mr. Millais’ book by him, as a vade mecum of architectural, planning, building, and even moral pathology. This is unlikely to happen, for two reasons: First, it is expensive (one can only hope for a cheaper edition in a little while); and second, and much more important, Jeanneret seems to exert a (to me) unaccountable hold over architects and intellectuals who concern themselves with architecture. In France, for example (but not only in France), to criticize him is to put oneself beyond the pale of polite discourse, and indeed careers have been obstructed if not actually ruined by doing so. He seems to have established a grip over minds, and those who are attracted to him are attracted also to totalitarian methods of keeping control over opinion. While hundreds of fawning books have been published about him, describing him as a genius, etc., only a relative handful have taken a critical stance, and even those that provide ample evidence of his manifold defects and crime often refrain from drawing the obvious conclusions about him.