Leading From the Front of the Bus 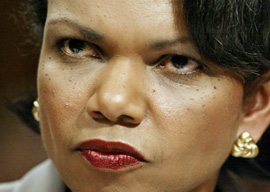 Sometimes seemingly insignificant events dramatically affect the course of human history. The failure of a struggling young artist named Adolf Hitler to pass a drawing test at the Vienna Academy of Fine Arts in 1907 changed world history decisively. Instead of becoming a certified representational artist with modest artistic skills, Hitler pursued a destructive career as a world leader. The future FÃ¼hrer may also have come to hate Jews partly because he mistakenly believed that one of the professors who failed him was Jewish. Actually the referee in question, Siegmund L”Allemand, was not a Jew with an assumed name but the descendant of French Huguenots who had settled in Germany centuries earlier.

These striking details from Brigitte Hamann’s study Hitlers Wien seem relevant for another situation where small things may have cast a long shadow. I am referring to the childhood experience of our 66th secretary of state, a black lady who had grown up “surrounded by racism in the segregated South.”

“Condi is not the only loose screw in the GOP policy community, but she holds a special place as a black woman who supposedly succeeded despite the odds.”

Condoleezza Rice, born in Birmingham, Alabama in 1954, faced restrictions as a child that even successful blacks had to endure. Her access to educational institutions and other facilities was limited by what remained of the Jim Crow system, as she explained in addressing the GOP convention on August 29. Her 1993 appointment as Stanford’s first black female provost and her importance as W’s secretary of state underline the success story of a black person who triumphed over segregation and eventually made out fabulously well. Condi broke another grim barrier in August 2012 by becoming one of only two women ever admitted to the previously all-male Augusta National Golf Club.

Condi was an adolescent when legalized segregation was on its way out even in the Deep South. Moreover, she has spent almost her entire adult life being the “first black female” something or other. A few weeks ago Ann Romney was still leaning on her husband to showcase Condi by naming her as his vice-presidential running mate. Rice was a popular choice for that office among Republicans, who were trying to overcome the stereotype that they are racists, sexists, and whatever else the media are now calling them. Elevating Condi to further honor, or so rank-and-file Republicans believe, may help counteract this impression and perhaps finally convince self-doubting Republicans that they are super-sensitive.

Condi has expounded and put into practice what she describes as “transformational diplomacy.” Rejecting traditional diplomatic approaches, she advocates a missionary form aimed at molding the rest of the world into political clones of American democracy. In her speech to the GOP convention, she said that unless we “lead from the front” and make our ideological goals explicit, the world is doomed to “chaos” and confusion. Peace can only be assured if we impose our human-rights vision everywhere.