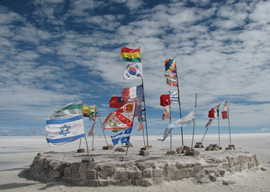 In his recent syndicated column “A U.N. for the good guys,” Jonah Goldberg evokes the mindset of seventeenth-century puritanism. This is entirely understandable. Much of what the American left teaches, including its neoconservative element, resembles American Calvinism”albeit in a warmed-over form. In Puritan New England, Congregationalists”the only authorized communicants”were deeply troubled that unredeemed polluted their assemblies. Those who considered themselves visible saints were forced to break bread with those who could not properly prove their divine election. This led to a sectarian split that resulted in Rhode Island’s settlement by breakaway Calvinists disgusted by the toleration of impure religious assemblies in Massachusetts. This determined group of dissenters formed a purified congregation of the saints

In a similar way Jonah is looking for pure souls. He is agitated that Russia and China would not vote for “a fairly toothless U.N. resolution condemning the regime in Syria and calling for President Bashar Assad, the lipless murderer who runs the place, to step down.” Jonah points to a terrible spiritual defect in the governments that opposed the resolution. To him it is an outrage that the UN Security Council assigns seats to countries “because they are powerful, not because they are decent, wise or democratic.” This stems from what Jonah says is a “category error”: “There is nothing in the UN Charter…that says a government has to be democratic or even care for the welfare of its people.” The UN does something even more grievous from the neoconservative standpoint: It serves as a “counterweight to the United States” and allows morally reprehensible countries to thumb their noses at America..

“Has it ever dawned on Goldberg that not all nation-states have identical interests?”

Although Jonah holds back on the idea of “getting rid of the UN” completely, he says it may be possible to create a “league, or concert, of democracies” under American ideological leadership. Here the pure of heart would be able to assemble and act in concert because “good nations want to see good things done.”

A permanent global clubhouse for democracies based on shared principles would make aiding growing movements easier and offer a nice incentive for nations to earn membership in a club with loftier standards than mere existence.

Has it ever dawned on Goldberg that not all nation-states have identical interests? Some of them vote against the American government or our establishment media because they are pursuing their self-interest, at least as they perceive it. In Syria’s case, as Taki astutely points out, the Sunnis” supporters, led by the very undemocratic Saudi Arabia, are inciting an overthrow of the present Shiite-friendly regime. Whatever replaces that government is not likely to be any nicer than what it supplants, just as Mubarak’s ousting has not led to a surge of democratic liberties in Cairo. We are talking here not about a return to Edenic purity, but about a circulation of elites. The Chinese and Russians have opted for Syria’s Alawi rulers, who depend on their Iranian connection. This leadership is being opposed by the surrogates of the Saudis and other Sunni militants, who are trying to take power from Assad.