Learning Not to Love 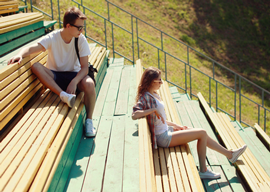 Making fun of millennials is all kinds of fish-in-a-barrel fun. Their creepy, dehumanized fixation on their smartphones reminds me of lab rats, pushing the Tweet button to light up the ego centers in their brains.

Perhaps this smacks of an uncharacteristic faith in human nature, but I want to believe that only people who came of age in the hive-mind of social media could have gone along with something quite as insane as the recent “shirtgate” farce”in which Twitter nation mob-harassed a scientist who landed a space probe on a comet into tears because he did a press conference in a shirt patterned with pretty ladies. If the stupidity weren”t so cruel, it would be hilarious.

But amusement at others often betrays a vague feeling of our own shame.

The cognitive changes that come about over the course of an electronics-mediated existence are insidious. And as I recently read Todd Ehler’s self-published novel, Ready or Not, I was reminded that those lousy kids” selfie addiction is only the extreme end of a process that’s been going on for longer than I”ve been alive. Almost everyone who’s now below senility age was raised, to some degree, a creature of the media.

“Amusement at others often betrays a vague feeling of our own shame.”

The male protagonist, Allen May, starts off as a charming dork with an improbable dream: when he finds four straw boater hats in an antique shop, he’s inspired to talk his three best friends into starting a barbershop quartet to try to get girls. This may sound ridiculous even for the now-old-fashioned 1980s. But aside from the fact that Al grew up steeped in his sad but loving mom’s fixation with old-time musicals, Ehler finesses the idea by modeling the boys” dialogue not on the novelistic tradition, but on the call-and-response legerdemain of works like The Music Man:

“It could work. For girls. You know, really. In secret, of course.”

The style’s oddness isn”t so much avant-garde as it is desperately nostalgic, and despite the impending tragedy, it has a charming feel.

The story of the female protagonist, 11-year-old Ann Lambert, is a harder sell. Her loss of innocence almost seems random till it’s tied in to the other themes of the book, and on the surface it sounds heavy-handed, so bear with me. In the opening scene, Ann is visiting her best friend’s family, led by an old-fashioned and loving couple; she wishes she belonged to them, as her family is dominated by her cold, social-climbing mother. Duty sends Ann home, but on the way she’s assaulted and violated by a stranger.

With, certainly, all due respect for the pain of rape victims, sexual assault in literature these days is too often presented in a manipulative, politically charged fashion. Ehler writes it differently, but a smart marketing person would have glossed over this hot-button issue. (In Ehler’s DIY promo copy, it’s front and center; yet another example of why it’s regrettable that authors now have to be their own marketers.) At least here the victim is female while the author is male, taking the story back a step from the “argument from me” fallacy that has come to dominate modern storytelling. The rapist is never given a line of dialogue, much less a political party affiliation”he’s a faceless manifestation of human darkness. And Ann is never idealized; she’s something of a grumpy kid to begin with.

The experience makes her painfully sensitive to the increased sexualizing of the culture around her, but what’s saddest about her story is that she has no one in whom to confide. Her best friend seems like a baby to her now, and her mother, Tammany, is less interested in finding out why Ann is acting so strange than she is in sleeping her way to a comically illusory chance at fame and fortune.

Tammany is angling for the attentions of a Hollywood producer who’s come to town, filming a big-time video for a band called Gazm. She’s snared a role as his local coordinator, and he hints that she can get a cameo in the video if he can get her in bed. She gladly chases her husband and kids out of the house in order to oblige.