Learning to Hate Our Two-Party Democracy 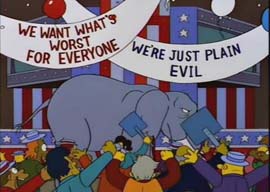 This morning (on September 15) while dressing, I was watching The Today SHow and noticed three figures being interviewed, all of whom were supposedly “Young Conservatives.”  The three looked as if they were on loan from a nursing home, and all wore matching black suits. The most animated of the stooges, Republican congressional whip Eric Cantor of Virginia, claimed to be “reshaping the culture of Washington,” while he and his party were seeking to lower taxes and furnish African Americans with jobs. Needless to say, these pols personified the Washington politics they claimed to be against, and there is no way those politics could be changed unless such types fell into a black hole.

Do these not very “young conservatives” really believe that African Americans will vote for their party because it will provide jobs while lowering taxes? Blacks vote Democratic at least in part because they want to have wealthier whites and successful Asians pay for programs that benefit them specifically. Obama’s medical insurance legislation is what black voters want, because it redistributes money from the non-black middle and upper classes to low-earning and unemployed recipients, who are disproportionately black.

With two parties, there is double the amount of hot air. It is hard to keep one’s sanity before an election.

Black voters couldn”t care less about how many Martin Luther King shrines the Reps are about to commission or about how many times Cantor’s party apologizes for slave ships and segregated lunch counters. Cantor and his fellow-schleps are not likely to see their party’s share of the black vote rise much from its present 2%, and especially not if they promise to lower taxes. Whether or not they will do so is another question, but to the extent they seem committed to that idea, black voters are not likely to support them.

As I listened to this talkathon, it became obvious that something even worse than living in a one-party state is to live in a state with two parties. Where only one party is around, there’s no more than a single gang of thieves. But where there are two parties, then the gangs alternate with each other in picking your pocket and creating useless government departments to dole out patronage. Moreover, where there are two parties, as opposed to one, there is double the amount of hot air, especially around election time. It is hard to keep one’s sanity in this country before an election, given such nuisance factors as receiving canned phone calls at night from one or both of the two parties and having news programs on TV interrupted by the windbag messages of the rival candidates.