Learning to Laugh at Stereotypes 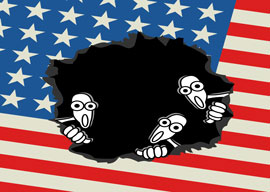 Of all the millions of ways to be an asshole, the status quo regards “racism” as the most alarming. Put on your X-ray specs and you’ll see the contagion everywhere. According to a recent study, 10,000 “racist and ethnic slur terms” are hurled on Twitter daily. Imagine all the tender sensibilities withering in the heat of those Tweets.

Still, Twitter must be teeming with insidious racists, right?

That depends on the context. Unlike many on the left, the Demos researchers who conducted the study claim that uttering racial slurs does not make you a hateful racist. Not necessarily, anyway. Their “machine analysis” revealed that about 70% of the time, people used slurs as a non-derogatory “Group ID” to refer to out-groups. These Twitter users may be coarse, but at least they’re not full-on bigots. I guess Madonna can get off her knees now.

“Comedy is one way to defuse a racial powder keg that could easily blow America apart.”

The remaining Twitter slurs have an edgier tone. They are categorized as “Targeted abuse” (~20%), “Casual use” (~10%), and “Ideological””as in Aryan Nations or the New Black Panther Party”which are a mere fraction of a percent.

Should such insensitive language be a big surprise?

Anyone who spends time outside the PC bubble of corporate culture, academia, or mainstream media knows that the “Casual use” crowd is pretty run-of-the-mill. However, if such comments are uttered within earshot of polite society”especially when uttered by white people”the typical penalty is a keloid “R” on the forehead. Novelist James Ellroy nailed it when he said, “Critics want racism, and secondarily homophobia, to be portrayed as a defining characteristic, rather than a casual attribute.”

In my world, colorful racial language is typically more amusing than dangerous, even when directed at me.

I’m not talking about “hate speech” here. This has nothing to do with Klan rallies or the future rap track that will burn down the city. This isn’t about the lead-up to lynchings or the Knockout Game, either. Interracial violence may be sensational, but in my experience (and according to crime statistics), most people of any race are peaceable toward others, if often unfriendly.

“Racists” aren’t special in this regard”they tend to lack respect for the Cultural Other, just like any other jerk. Lisping fashionistas launch venomous barbs at the poorly dressed. Liberal intellectuals belittle the IQs of red-state hillbillies. Fundamentalist Christians deride the cherry-popped fans of pop culture. Organic fanatics mock blobby junk-food gobblers. Suburban kids make fun of lice-bitten trailer trash, who go on to beat up bookworms, who go on to detest the illiterate. The tribal impulse is all too human. Skin color is just another target.