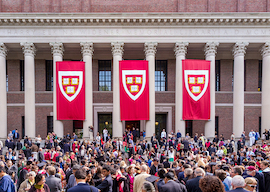 NEW YORK—I can’t believe this, but I’m about to defend Harvard.

Four years ago a group of Asian-Americans sued Harvard, claiming the college’s admissions policies discriminate against Asians. Actually it’s not clear to me whether they’re claiming discrimination against Asians applying from other countries or just Americans of Asian ancestry, but the gist of their argument is that ethnic Asians are often rejected despite having higher test scores than blacks, Latinos, or plain old garden-variety nonethnic white people from ranches in Montana.

Harvard’s answer to the lawsuit is, “Dude, it’s not just about grades and test scores.”

The reason this is taking so long to litigate is that Harvard kept fighting against releasing the secret records that explain how they accept and reject. Eventually it all spilled out anyway and it wasn’t that interesting. They grade applications in four categories—Academic, Extracurricular, Personal Qualities (from a one-hour in-person interview), and—the stunner—Athletic. One of the experts last week testified that someone scoring a 4 in Athletics made you 1,000 percent more likely to get in, and documents released during discovery indicate that 86 percent of recruited athletes are admitted. I know they always have to win the Harvard–Yale game and everything, but…really? Harvard is apparently so desperate for top-quality athletes that they’re likely to rocket you up that ladder toward entering-freshman status if you’ve been an all-conference anything in any sport. The Ivy League doesn’t allow actual athletic scholarships, so this is a way to beef up that offensive line by luring an average student who happens to weigh 320 pounds with promises of…well, I’m not sure…easy grading on his Eastern Philosophy term paper?

In fact, given the statistics on athletic favoritism, I’m expecting another lawsuit any day now to be filed by wheelchair-bound high school seniors who were cruelly excluded because the available spots went to strapping outfielders in Idaho. (It also helps to be from Idaho. The secret admissions standards include a special effort to recruit students from “sparse country,” meaning all those red states where the soybeans grow.)

Since this is one of the more inventive lawsuits filed lately, it’s described as “destined for the Supreme Court.” So if I’m Clarence Thomas or, say, Brett Kavanaugh, and these guys show up on oral-arguments day, my first questions are gonna be:

What do you mean by Asian?

There are 48 countries in Asia, they’re all different, which ones are we talking about?

And what do you mean by Asian-American? First generation? Second? Descended from the famous “coolies” who built the railroads and then were treated like scum, as we were all taught in our eighth-grade history books? How far back do we have to go before “Asian” drops off and you’re just American?

Since China and India are both in Asia, and that accounts for 2.8 billion people, which is nine times more people than live in the United States, and since that’s only two of the 48 countries you’re talking about, aren’t you casting kind of a wide net here?

Are you saying that the various Harvard admissions officers and alumni interviewers are going out into the hinterlands of America and saying, “Yeah, I caught an Uzbek trying to sneak in, just like that Mongolian chemistry major last year”?

And how do we know you’re Asian-American? Did you just check a box on a form or did we really take a good hard look at your DNA? Could someone who thinks they had one Asian ancestor three centuries ago check the box and claim the ethnicity, like Native American Harvard Law Professor Elizabeth Warren? It looks like, yes indeed, they can.

But there’s a much more important principle to be defended here.

“Believe me, that rejection letter is the best thing that ever happened to you.”

Harvard is a private institution. They can make their mission anything they want it to be. In fact, they change it all the time. In 1636 their mission was to educate Puritan ministers. I’m just guessing here, but I would imagine that if you applied to Harvard in the 17th century and answered “Roman Catholic” to the religion question, even if all you wanted to study was law, they would kick your heinie down to Rhode Island and not think twice about your other qualifications.

Don’t get me wrong. Harvard pisses me off almost as much as Yale does. Half the Soviet-style Thought Police ideas of the past forty years have had their origins in the Ivy League. When I was an undergrad, we got tired of hearing our school called “the Harvard of the South”—as though a school populated by arrogant little cardigan-wearing pricks who would feel at home in an F. Scott Fitzgerald novel somehow represented the gold standard of education—and started referring to them in the campus newspaper as “the Vanderbilt of the North.” They obviously have admissions standards that include frequenting a lot of places with “Members Only” signs, giving money to Harvard, being descended from somebody else who went to Harvard, and, over the past few decades, being a plucky minority who had to overcome great obstacles in life to win that Crimson sweatshirt. By giving full-ticket scholarships to these spunky minority members, they don’t even realize how condescending they’re being. Nevertheless, they have the right to set up any admissions criteria they want. The Supreme Court has repeatedly ruled that a private organization can control its own mission and can’t be forced to include people who don’t fit in.

And so why, if you don’t fit in at Harvard, would you go to these great lengths to get the snooty High Brahmins to change their minds?

One of the best discussions of the whole “Harvard hates Asians” myth can be found in the Comments section of a Harvard Crimson article, in which an Asian-American goes through the four “personal qualities” Harvard is looking for when the prospective student is interviewed, in an attempt to show why the valued qualities themselves constitute discrimination. The personal interview is the area where, the plaintiffs maintain, Harvard cooks the books in order to exclude Asians.

The categories are as follows:

(1) Student may display enormous courage in the face of seemingly insurmountable obstacles in life.

To this the Asian-American replies that he has a “cultural requirement of stoicism.” Sharing his challenges would be “unseemly” and would cause “a peculiar kind of shame.”

(2) Student may demonstrate a singular ability to lead or inspire those around them.

To this the Asian-American replies that ethnic Asian teens “often find themselves sidelined because they are viewed by their fellow students as the perfect assistant, the perfect executor, the perfect organizer.” The American concept of leadership has no recognition for able deputies.

(3) Student may exhibit extraordinary concern or compassion for others.

To this the Asian-American replies that most Asians “don’t actively volunteer to help strangers because our family-centered philosophy contends that, for the most part, strangers will be helped by their own families,” and that, furthermore, “asking another family for help is dishonorable.”

(4) Student receives unqualified and unwavering support from their recommenders.

Besides containing a lot of stereotypes and generalizations (are Korean-Americans the same as, say, Bangladeshi-Americans?), what this defender of the plaintiffs is really saying is that Asian-Americans with this particular psychological profile don’t belong at Harvard. They don’t fit in with the Harvard culture. And so, I suppose, what he’s also saying is that Harvard should change its culture to be more Asian. That’s like telling Tsinghua University that they should change their admissions policies to be more American. It’s absurd.

There are a lot worse things in life than failing to correspond to Harvard’s idea of what constitutes an impressive Facebook profile. Stop begging to get into the most overrated snob factory in America. One of the deans let it slip at a Faculty Senate meeting a few years back that the median grade at Harvard is an A-minus. This means they hand out A’s like candy to the people who fit in. Look closely at that freshman from Kazakhstan and you’ll probably discover that his father is a muckety-muck in Central Asia. Scratch the surface and he’s no different from the Kennedys or the Whitneys or the Palmers or the Astors or the Basses. It’s not just a college, it’s a club, and they have a “Members Only” sign on the gate, and you’re not Harvard material. Be glad you’re not Harvard material. Join me and the 99 percent—white, black, Latino, Asian, and, hell, we even let French people in—who represent the truly inclusive America, not the one that traffics in symbolism while maintaining the same entitled clubs that have manipulated us into this political hell that we currently live in. Believe me, that rejection letter is the best thing that ever happened to you. You won’t get that guaranteed six-figure starter job at Goldman Sachs, but someday your soul will be glad you missed out.