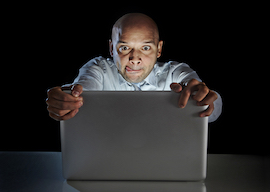 W.H. Auden once said that Eros was the builder of cities. If true, that would explain why American infrastructure is collapsing from decay. Earlier this year, Alek Minassian, a 25-year-old Canadian, murdered ten people by running over them in a van. He claimed as his cause (terrorists, like celebrities, need a pet cause for their brand) his own romantic and sexual unemployment. He identified as an “incel,” and the rebellion of them, he claimed in a Facebook post, had just begun with these murders. It’s funny that the slang term “incel,” meaning “involuntary celibate,” autocorrects to “uncle,” since many of these guys—today young, angry, and sexless—will someday soon be merely hapless, eccentric, middle-aged uncles.

That the killer used his new infamy to give a shout-out to a message board or online community, repeating memes and catchphrases, is a testament to the internet’s mixed legacy of enabling nerds to coordinate with one another. Thirty years ago Alek would have been forced to know people unlike himself, and that, at best, would’ve led him to socializing, courtship, and (someday) marriage, or, second best, not allowed him to wallow in the type of self-pity that justifies running over strangers with your car. Thanks to online communities, the German phrase “Two idiots, one idea” can now be “Ten thousand idiots, one idea.” It’s not good when that one idea is murderous resentment.

Following that attack, a woman named Jia Tolentino wrote an essay in The New Yorker making sense of the minds behind the incel “movement.” The stated theme was “Incels aren’t looking for sex. They’re looking for absolute male supremacy.” Keep in mind: If a male writer tried to make sense of a female “movement” in 2018 by summing up what it was “really about,” it would be dismissed by feminists as mansplaining. So, in that spirit of identity politics, because Jia is a woman I’m afraid we’ll be dismissing her entire essay about the incels as femsplaining. Live by identity politics…

“Most young men now act as neurotic as Norman Bates.”

This is what the beat generation is about—from Kerouac to the Living Theatre: all the “attitudes” are easy—they’re not gestures of revolt—but natural products of the drugged state-of-mind. But anyone who is with them (or reads them) who isn’t stoned naturally interprets them as people with the same mind you have—only insisting on different things. You don’t realize they’re somewhere else.”

Likewise, many of the attitudes and hobbies of millennials—that seem inscrutable to what the hippies called “the straight world”—have to do with a porned-out mind. The average millennial has the kind of look that used to be described as “otherworldly.” By their late 20s/early 30s, many look just plain burned-out, like a fruit that passed over ripe and went straight to rotten. The millennials who have blown out their libido or manhood on porn are the equivalent of the hippies who went deaf from blasting their music or who went blind from staring at the sun (although the latter were probably apocryphal). As millennials turn middle-aged they’re bound to get their own “burnout” archetype, the same way the hippies eventually got Christopher Lloyd’s burnout Jim Ignatowski on the sitcom Taxi.

If millions and millions of young men are going around without (per the Reddit list) confidence, energy, and “a general sense of living a full life,” it goes a long way in explaining the anomie and self-destructiveness of young men today. The kind of comedy that’s become big in the internet age, the genre where men act pathologically awkward and anxious, epitomized by the actor Michael Cera, is partially the effect of men becoming shell-shocked from porn. Going back further, the kind of actor or character who was proto-millennial was Anthony Perkins’ Norman Bates. In the tame world of 1960, Perkins’ offbeat persona as an actor conveyed something other than straightforward masculine sexuality, and that was used by Hitchcock to convey a sexual temperament that an audience could tell was abnormal, strangely skittish around a beautiful girl (played by Janet Leigh in Psycho). It’s after Bates has a pleasant encounter with Leigh that he’s forced to kill in order to assuage his sexual guilt for having lusted. I bring this scene up because the type of young man who came across as a weirdo almost sixty years ago codes, today, as a prototypical romantic male lead. Perkins’ demeanor with Leigh, in 2018, could be used as a meet-cute in a romantic comedy. Most young men now act as neurotic as Norman Bates.

It’s not like we weren’t warned: Almost every society that’s ever existed has had stigma, if not laws, on viewing pornography. It’s like cigarettes in that you can’t say you didn’t know they’re bad for you.