Leave Him to the Lions 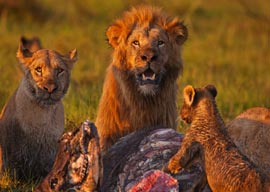 I had a mouthful of barbecue when the white South African calmly explained the proper way to dispose of a dead black man. The topic was disturbing enough, but the deadpan delivery, and my suspicion that he was speaking from experience, made it much, much worse. “You leave him to the lions,” he stated. He explained that South African courts rarely view the killing of a black man by a white man as justified, so if you catch an intruder on your land, you take care of him yourself, and you leave the remains for the lions to finish off.

During my time as the “Republican Party Animal,” I held regular soirees at a South African barbecue restaurant in Van Nuys called Springbok. The white South African expatriates who populated the joint told me the same story again and again: The racial injustice of the apartheid era was not gone, but simply inverted. I was told many unsettling tales about a justice system once run on white supremacy, now run on black revenge.

When I was in high school, my best friend’s father”a black Baptist minister”explained to me, in a one-on-one sermon, that he had told his flock numerous times that true equality can only come from new inequality to replace the inequality of the past. To demonstrate, he took a piece of paper and folded it in half. He showed that when you try to flatten out the paper, the “memory” of the fold will slowly bend the paper back again. The remedy, he said, was to fold the paper the other way and let it sit for a while. Having been folded both ways, the paper can more easily straighten out.

“This is what has to happen in the U.S., son,” he summarized. “The paper was folded to give an unfair advantage to whites, and now it has to be folded the opposite way, to give blacks their turn as the privileged ones. Only in that way can we one day be on level ground.”

“Is Carver-Allbritton a racist? Did she start the fight? Maybe, maybe not. The lynch mob felt no need to wait for the facts to emerge.”

I didn”t buy it then, and I don”t buy it now. But then again, I was never one for sermons. Yet there’s no doubt that some people in the U.S. share his point of view. There’s no shortage of black Americans (and white leftists) who favor “folding the paper the other way” in the name of “social justice.” Blacks used to be penalized for standing up to whites; now it’s time to give whites a taste of that treatment. No advocate of this type of thinking will ever publicly call it revenge, but that’s all it is, pure and simple.

In 2012, as the U.S. was enthralled by a case involving Skittles, hoodies, and white Hispanics, it was common to hear black activists say that even if Trayvon Martin had indeed started the physical altercation, George Zimmerman should have taken the beating. Martin was owed the right to beat on a possibly racist neighborhood busybody. In 2014, when Skittlemania was supplanted by Hands Up Don”t Shoot-o-rama, the shop owner who was roughed up by Michael Brown felt compelled to apologize to the black community for getting assaulted. Brown was owed a handful of free cigarillos, and getting thrown about in his own store was legitimate punishment for daring to stand in the way of a man merely trying to exit with his reparations.

And now, as if on cue, 2015 has given us the Texas Pool Party Massacre. But whereas the media has focused on the conduct of “Officer Barrel Roll,” leftist activists have joined together to destroy the life of the blond woman seen briefly in a video from the incident, trying to break up a fight between a black girl and a white one, finally striking the black girl several times to get her to let go of the other girl’s hair.

“Social justice warriors” have decided that the blond woman, Tracey Carver-Allbritton, must be punished, by any means necessary. She raised a hand against a person of color, and this cannot be allowed. I fully understand the scrutiny that the overzealous cop’s actions provoked. Police officers should be scrutinized. Like politicians, they are (in theory at least) public servants. But Carver-Allbritton was a bystander, a civilian, and her sole provable offense was raising her hand to a black person (who was locked in a death grip with another woman). Is Carver-Allbritton a racist? Did she start the fight? Maybe, maybe not. The lynch mob felt no need to wait for the facts to emerge.

Stephen Benavides”an Occupy activist, Truthout.org writer, and AFL-CIO organizer from Texas”launched an online “shaming” campaign, via his organization Dallas Communities Organizing for Change, specifically intended to get Carver-Allbritton fired from her job. Benavides claimed in the Daily Kos that Carver-Allbritton had been “confirmed to have made racist comments that led to the fight and the police being called in the first place.” This was repeated by Raw Story (credited to Benavides), which took the claim viral.

As of this writing, Carver-Allbritton’s employer, CoreLogic, a California-based financial data and analytics company, has placed her on administrative leave due to Benavides” campaign. Because, of course, she’s the “confirmed” villain. It’s not revenge, see? It’s justice, because Carver-Allbritton’s role as racist instigator had been “confirmed.” But confirmed by whom? Where? I put this question to Mr. Benavides. He replied by sending me a video of a young black girl who was part of the melee. I asked him if there were any witnesses not directly connected to the aggrieved black partyers. He responded, “The majority of people who are willing to talk were at the pool party, and those who were there and are subject to public scrutiny are off the radar and have counsel advising them to not respond, or so I assume.”