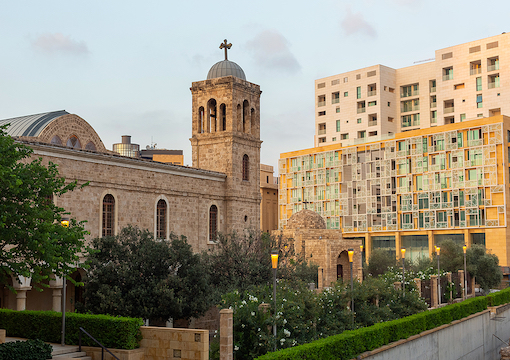 Exactly fifty years ago last month I was lolling by the pool of the St. Georges Hotel in Beirut surrounded by bikini-clad women of uncertain virtue, spooks, pimps, journalists, and rotund Lebanese playboys who gave a bad name to the genre. The scene was straight out of the movie Casablanca, except we all wore swimming trunks and there was no Rick to run the show. I was waiting for two Paris Match journalists who had a car to drive together to Amman, Jordan, where King Hussein was fighting a war of survival against the Palestinians, a conflict he won that is referred to by the losers as Black September.

On the day before our departure, I was asked by Genevieve Chauvel, a blond French journalist beauty known to be King Hussein’s girlfriend, to take a letter to him, and I accepted with alacrity, as it meant I could get into the palace in Amman and get a story. A few miles north of Irbid we were stopped by a PLO contingent and taken to a room for interrogation. While anxiously waiting for it to start, Alain Tayeb announced that he was Jewish and a goner. Jean Pierre Boscardo said not necessarily. I said that if there was one goner it was I because I had a letter on my person for the king that was making mincemeat of the Palestinians. In a panic we opened the letter and read it—it was the most erotic note ever, but under the circumstances sex was the last thing on our minds—and then the three of us ate it. As I was the carrier, I was asked to eat the envelope. Just as I took the last unpleasant swallow, a fighter came in, showed us his upturned open fist, and said, “Free to go, free to go.”

“The protester students in America today have no idea what the consequences of their protests will be.”

We never made it to Amman, as patrol after Palestinian patrol stopped and interrogated us. I was soon back by the pool at the St. Georges, that den of iniquity no longer around, having been blown up during the civil war that began in 1975 and ended in 1990. Lebanon has been in the news lately after a horrific explosion in its harbor blew half the city away and brought down its umpteenth government.
It comes to mind because of what’s taking place in America as I write. No, the U.S. is not Lebanon and not about to turn into Lebanon, but America’s tear-it-all-down leftism, its despotic antiwhite racism, the relentless campaign by the media against Christian white middle classes, and the war against long-established customs and beliefs cannot have a happy ending.

But let’s start at the beginning. Lebanon was founded in 1943 at the close of the French mandate. The new country was carved out of Syria after the fall of the Ottoman Empire by Britain and France, and since the beginning was always a failed state, unable to protect or feed its people or defend its borders. Corruption by its elite, factionalism, sectarianism, and lack of democratic accountability were the problems. Shiites, Sunnis, Druze, and Maronite Christians jockeyed for power and influence. (Eighteen religious sects divvied up power, profits, and patronage.) Palestinian refugees, Israeli incursions, Iranian-backed militias, and various warring tribes complicated matters. Basically, Lebanon was a place where tribes with flags competed against each other. The civil war solved nothing but produced more poverty and misery for the poor. Rebuilding Beirut made some people billionaires many times over. Seventy-seven years after its birth, in the most volatile part of the world, Lebanon has no formula for governing that satisfies its warring tribes. The state can neither be fixed nor helped, and it’s all due to foreign meddling at the start that has now given way to a new generation of oppressors like Israel, Iran, Saudi Arabia, and Syria. Yemen, a defenseless state bullied and tortured by Saudis, is another failed country of the area.

As I said before, I’m not comparing Lebanon to Uncle Sam—there is no connection—but the hate campaign against American institutions taking place as I write reminds me of when I first visited Lebanon and was amazed to hear so many different versions of the actual situation. And Beirut back then can be compared to New York City today, what with posh and expensive buildings on Fifth Avenue housing multibillionaires rubbing shoulders with aggressive panhandlers, out-of-control shooters, and rotting garbage- and rat-infested streets. In large American cities today, public urination, defecation, and drug dealing are the norm, and under the BLM mantra all civil disobedience is accepted. Uncontrolled immigration has turned the country into Babel, a giant Lebanon with its own continent, every sect and race pulling for its own. The latest BLM message is to defund the police, to abolish the prisons, and to destroy the Western-prescribed nuclear family. Oh yes, and a “queer-affirming network that will dismantle cisgender privilege.”

Beliefs of all sorts are best understood in terms of their consequences. The protester students in America today have no idea what the consequences of their protests will be. A trip to Beirut would set them straight, but perhaps the extent of their geographical knowledge is limited to the campuses they are at present disrupting.