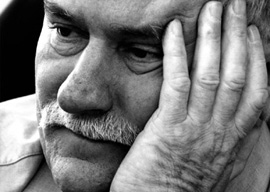 Lech Walesa, the burly and walrus-faced former union organizer and president of Poland, inflamed the world of flaming homosexuals and their enablers with comments he made Friday evening on a Polish television station. If his screeching critics are to be believed, the man who may be more responsible than any other human being for dismantling Eastern European communism has damaged his legacy beyond repair and may even deserve being banished to an ice floe.

Poland, which has a reputation of being a land where people are staunchly Catholic, fiercely anti-Semitic, and where its geographical neighbors routinely crush it underfoot, elected its first gay and transsexual members of parliament in 2011: the fully out-of-the-closet Robert Biedron and a transgendered woolly mammoth that calls itself Anna Grodzka.

Commenting on the recent infusion into Polish politics of people who swap out their genitals via surgery or put genitals similar to their own in their mouths, Walesa told the TV station:

Homosexuals should sit on the last bench in the plenary hall, or even behind the wall, and not somewhere at the front….I do not want this minority with which I disagree on the streets and my children and grandchildren confused….They have to know that they are a minority and must adjust to smaller things. And not rise to the greatest heights, the greatest hours, the greatest provocations, spoiling things for the others and taking (what they want) from the majority. I don’t agree to this and I will never agree to it. A minority should not impose itself on the majority.

“One can never have enough tolerance, even if it means silencing the opposition and squashing any ideological dissent Soviet-style.”

This wasn”t the 1983 Nobel Peace Prize winner’s first comment that might be deemed “hateful” or “homophobic” by the usual suspects. Last year he told a reporter that if his son turned out to be homosexual, he would pray for him to change his ways. In 2000 he said that homosexuals “need medical treatment,” adding, “Imagine if all people were like that. We wouldn’t have any descendants.” Gay activists have also alleged that in 1990 he promised to “eliminate” drug addicts and gay people if he was elected president.

But the former electrician’s latest comments have proved to be the straw that broke the sodomite’s back, resulting in a torrent of recriminations, condemnations, finger-wagging, and openly flaunted hurt feelings.

With the sort of hyperbole typical of the New Arbiters of What’s Morally Acceptable, Walesa was dubbed a “hateful bigot” and a “homophobic moron” who had delivered “an astonishing outburst against homosexuals.”

“From a human point of view his language was appalling,” said a member of Poland’s Democratic Left Alliance. “It was the statement of a troglodyte. Now nobody in their right mind will invite Lech Walesa as a moral authority, knowing what he said.” A Polish TV journalist said that Walesa had “disgraced the Nobel Prize.” Even Walesa’s own son said that his father’s comments were “fundamentally wrong and harmful.”

Naturally, a group of butt-hurt gay activists, otherwise known as a “national committee devoted to fighting hate speech and other crimes,” filed a formal complaint against Walesa with Polish officials on Sunday accusing him of disseminating “propaganda of hate against a sexual minority.” One can never have enough tolerance, even if it means silencing the opposition and squashing any ideological dissent Soviet-style.

The eternally sneering and sanctimonious Daily Kos website said that Walesa had destroyed his legacy with a single interview.

Apparently there is a new morality afoot, and heroically enduring persecution and incarceration to help dismantle the Iron Curtain cannot begin to make up for insinuating that gays”who, as is often suggested about Jews, may be a privileged elite rather than an oppressed minority”are hell-bent on forcing their sense of what’s moral upon a largely unwilling and unsympathetic public. And apparently one is no longer permitted to merely be a pro-labor economic leftist anymore, as Walesa was in his prime; one also has to lick every last morsel off the Cultural Marxist dinner plate or risk continual condemnation and eternal banishment from polite society.