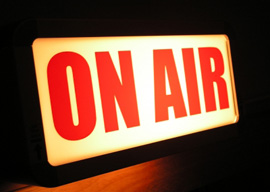 I am a man of the right, so much so that for me the Nazis were simply brownshirted cousins of the enemy in Moscow. In American terms, my political sympathies tend to rest with such marginal figures as Fisher Ames, Timothy Dwight, Orestes Brownson, Washington Irving, Franklin Pierce, Henry Adams, Ralph Adams Cram, Ross Hoffman, and movements on the order of the Southern Agrarians and the America First Committee. In terms of practical politics, my views have not been represented since the late lamented Senator Robert Taft left office.

Having briefed you on my political leanings, I must share a dirty little secret: I regularly listen to radio station KPFK. The Southern California outlet for the Pacifica Radio chain, KPFK is a sort of Colonial Williamsburg of the airwaves for the far left. Here you can find such fare as Democracy Now!, Against the Grain,  Smiley and West, and The Insighters. In need of some warmed-over spiritual comfort? Tune in on Sunday morning and listen to the unfrocked Maryknoller Blase Bonpane prattle on about liberation theology and kindred subjects.

“To put it in medical terms, their diagnosis of the illness is often as spot-on as their prescription is lethal.”

On one level, I listen due to a sort of weird nostalgia for the days before communism’s fall. Not only do the station’s many elderly hosts relive their radical pasts, the younger ones thrill to such topics as the Abraham Lincoln Brigade, Alan Watts, Howard Zinn, Pete Seeger and the Weavers, and 1960s sit-ins with a passion that only those of us who love history can understand. In a way, it is like so many 1970s songs: I despised them as a teenager and don’t like them now, but hearing them brings back my teen years with a vengeance.

Listening to many of their programs has added greatly to my store of meaningless words and phrases: “sustainability,” “transparency,” “food security,” “heterosexism,” “gender awareness,” “system focus,” and countless other formulae take on new significance when chanted by folk who deem them important. In diluted form, this hieratic language can be found in most government websites the world over—I am grateful to KPFK for serving as a sort of Rosetta Stone.

But there is more to the station for me than mere nostalgia and comic relief. As intensely annoying—indeed, sometimes sickening—as I find many of the views expressed therein (especially as regards abortion), it is fascinating to see that many of the same public figures and events that annoy me are annoying others for opposite reasons. If I despise this and such a one for going too far, the folk at KPFK are likely to castigate him or it for “selling out” and not going nearly far enough. It helps to put persons, places, and things in perspective.