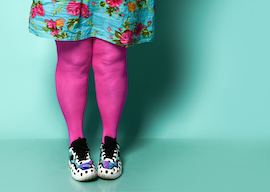 NEW YORK—As far as I can tell, there are six warring factions in the Leggings Wars.

As far as I’m concerned, these people can just go back to Bible school and shut up. They’re not part of this discussion.

So that leaves five warring factions.

(1) Leggings Are a Form of Underwear: This would include your high school principals, your Girl Scout leaders, your more conservative cheerleader moms who believe that leggings, as churned out in Chinese microfiber factories, are simply an updated form of what were once called leotards or tights. When you wore leotards or tights, you also wore a skirt, a dress, or, at the very least, your boyfriend’s oversize shirt.

(2) Leggings Are a Form of Athletic Wear No Different From T-shirts: This would include your aerobics instructors, your marathon runners, your basketball players. People who never wear anything except athletic clothes.

(3) Leggings Are Booty-Proud: This would be the species that believes the higher the bewtocks ride, the better life can be. Some of them have paid upwards of $20,000 for Brazilian butt lifts.

(4) Leggings Are Comfy So Leave Me Alone: This would be the majority of the population.

By the way, before I dive deep into this subject, I would like to point out that I have closely examined the forefoot of a camel and there’s no resemblance. Who came up with that metaphor in the first place? It had to be either a zookeeper or a Bedouin, and neither one of them has any business linking the vagina to a rather disagreeable pack animal. The Rorschach on that is troubling.

“I’m waiting for someone to design leggings that have a trompe l’oeil drawing of an actual human leg on the fabric.”

And while we’re on that subject, why is it “the dreaded camel toe” but not “the dreaded bulge” for men who wear leggings, especially ballet dancers who wear leggings? The quick way to get rid of either one is to wear jeans instead of leggings. (Although not jeggings, because jeggings are designed to look like jeans but cling to the skin like leggings.) When I was in high school, jeans were not allowed, so you would have to go to Kmart and buy what we called School Pants—cheap polyester shiny-ass straight-legged dorkarama pantaloons that would be stripped off, wadded up, thrown on the floor, and kicked under the bed as soon as you got home from class, only to be dug out the next morning when you were rushing to make the school bus.

The problem with polyester School Pants is that, like the leggings of today, they overemphasized any protrusions that might occur, if you know what I mean and I think you do. A male during his high school years can get an involuntary erection from a ceiling-fan draft and about a hundred other things a day that come into his field of activity, most of them having nothing to do with sex, and the result is that he can become a walking penis billboard at any moment, especially when wearing School Pants. In my opinion this is much worse than “the dreaded camel toe” because at least that can be solved by crossing the legs and pulling down on the fabric. Pulling down on the fabric in the male case might result in physical injury, ripped fabric, or worse.

So if that is your only problem, simply wear jeans. We suffered in School Pants so you wouldn’t have to.

But here’s what I don’t understand about the leggings controversies that periodically break out across the nation. (In case you haven’t been following, leggings have been banned in high schools, middle schools, Catholic churches, megachurches, United Airlines flights, office buildings, corporate campuses, and universities where students have rebelled with counterdemonstrations called Leggings Pride Day and Yoga Pant Parade Day.) Americans have obviously voted with their greenbacks for leggings, and so China continues to churn them out in a frenzy designed to get as many “high-elasticity” garments stretched across as many American bewtocks as possible before Trump mollifies the Leggings Shamers with restrictive trade policies. Last year was the first time in history that “athleisure pants” outscored blue jeans in import dollars.

So here’s my question. Didn’t we just go through 200 years of telling women that the more skin you cover up, the more modest you are? Now we’ve finally got this product that covers it all up! You don’t see the ankle, you don’t see the leg, you don’t see the thigh or the midriff, and—in the case of the catsuit, the jumper, the bodysuit, or whatever you call Spider-Man apparel—you don’t even see the shoulders!

All you see is the shape. And it’s the shape of the human body.

Let me correct that a tad. It’s the idealized shape of the human body. It’s a way to smooth out all the bumps and crevices and turn human skin into one of those Japanese anime cartoons where the generalized curves make everyone look alike. Admittedly, I’m not sure I understand the appeal of the “belfie” (the butt selfie), which is usually snapped while wearing athletic wear, also called fitness streetwear, also called activewear, also called “athleisure products.” But one reason people like leggings and all their variants is that they can just stuff their junk in there and let it settle.

In the Garment District of Manhattan, once dominated by haute couture guys trying to design the ultimate fancy dress, everyone is now much more concerned with the various ways you can manipulate leggings to make people believe your leggings are different from someone else’s leggings. Hence we have concepts like Anti-Cellulite Leggings, Brazilian Workout Leggings, Luminous Leggings, Embellished Velvet Leggings, Low-Waist Faux Leather Leggings, High-Waist Celebrity-Sponsored Leggings (Beyoncé has a line of them), Mohawk Leggings (stripe down the side), Shredded Leggings, Leggings embossed with your favorite Marvel superhero, Tiger Print Leggings, Butt-Lift Leggings, and Second-Skin Leggings. I’m waiting for someone to design leggings that have a trompe l’oeil drawing of an actual human leg on the fabric. The current athleisure leader is Lululemon, a Canadian company that sold its first pair of yoga pants in 1998, but Athleta, the company formed by the Gap because the Gap was too heavily identified with denim, is close behind, and the hardcore holdouts at Levi’s and Wrangler are keening like bullfighters’ widows.

I have seen the future, and it’s a lot more than just butts in jersey knit cotton. It’s Lycra-blend racer-back tank tops, breathable stretch-knit eco-blend loungewear finished with aloe vera on a yoga romper, and, yes, even a new generation of polyester. There are engineers in Colombia creating microfibers so thin and durable that they’ll be both beloved by Olympic swimmers and decried as pornography by butt-focused school boards. My message to the anti-leggings armies is: Surrender now. Your cause is already lost.