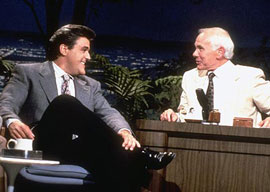 Yes, there really is a Burbank.

As a kid, I assumed that the smallish California city with the “beautiful downtown” was just a cheesy Tonight Show punch line, not a real place.

Today, all is not well in the “Media Capital of the World.” Its legendary aviation industry almost extinct, Burbank relies on its equally famous TV studios to stay solvent.

That’s why city fathers panicked when NBC announced The Tonight Show‘s move back to New York City when Jimmy Fallon takes over from Jay Leno next February. That means the loss of about 170 jobs in a city of just 100,000, plus the revenue from all the tourists who’ve trekked to Burbank since 1972 to be part of the show’s live audience.

The mayor jokingly threatened a hunger strike. Petitions were signed.

But those grassroots efforts couldn’t trump the so-called “Jimmy Fallon tax credit,” a line item in New York State’s latest budget that was clearly designed to lure The Tonight Show back to its original Rockefeller Center home.

So strange. Despite the trappings of 21st-century technology”you can practically hear the cell phones buzzing and keyboards clicking”this high-stakes bicoastal maneuvering seems absurdly quaint, like Civil War reenactments but with lawyers.

“The Tonight Show‘s importance in the entertainment economy and in popular culture has steeply declined since its iconic host Johnny Carson retired over twenty years ago.”

After all, The Tonight Show‘s importance in the entertainment economy and in popular culture has steeply declined since its iconic host Johnny Carson retired over twenty years ago.

His tremendous appeal famously escaped the British, but for lots of kids in those days of a three-channel universe, Johnny Carson was the chuckling white-haired guy you snuck downstairs to peek at when you got too old for Santa. Maybe we didn’t get all the jokes, but his show threw off toxic doses of glowing, grown-up glamor we longed to absorb.

These days, as Gavin McInnes pointed out last week, narrowcasting is the new broadcasting. Media is multifaceted and on demand. We swallowed the concept of “two Americas””one “red,” the other “blue””with shocking aplomb. So the idea seems as archaic as the divine right of kings: one man reigning for generations as the nation’s tastemaker.

(Especially someone as cold and enigmatic as Carson, who ruthlessly banished “disloyal” favorites in a heartbeat. Prickly and private, the story goes that when Madonna and Sean Penn got married next door, “Carson was so annoyed by paparazzi helicopters, he went out and spelled FUCK OFF on his front lawn with rocks.”)

The Tonight Show’s fading post-Carson influence is especially notable in the comedy realm. Time was, getting “called to the couch” after a stupendous set could turn a freshman stand-up into an overnight sensation, sometimes literally: Tom Dreesen signed a development deal the next morning.

Drew Carey still tears up at the memory of Carson waving him over to sit at his right-hand side:

People talk about the feeling of the Holy Spirit going through you and your body changing, and you feel like something’s changed in your life forever and ever”that’s what I felt like going over there, and I felt like I was in a dream the whole time. It was like being saved by Jesus, honestly.