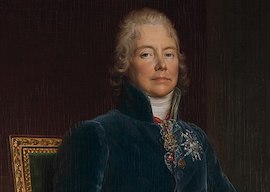 The Duke of Marlborough gave a toast last week that brought the house down during a Turning Point dinner for those of us resolved to end the threat of cultural Marxism once and for all. (Much easier said than done—the “crapitalists” of the entertainment industry control the culture.) The hosts were John Mappin and Charlie Kirk, a rising star in America, and Nigel Farage was the main attraction. (Outside, the usual rent-a-crowd of lefty mob agitators were screaming quaint and original insults such as “scum” and “fascists.”) Jamie Marlborough is living up to his name and rank. He exhibits none of that Rory Stewart bullshit (when asked what his greatest weakness is, Rory answered where he went to school). Jamie is proud of his heritage, his country’s history and institutions, and—these are my words, not his—probably thinks all Belgians have ever done is fuck and eat French fries. (That is all they have done.)

A disdain for patriotism goes hand in hand with those angry, twisted faces the Bolshevik Broadcasting Corporation nowadays accords unlimited access to, while it mounts nonstop negative coverage against Conservatives and Brexiters. Among the most undignified of professions are acting and politics, and yet very good people enter both. Not for the poor little Greek boy. The idea that I would have to sit on a stool and be interrogated by a woman loathsomely eager to score points, and have to answer politely, is anathema to me, but then I’m proud and don’t take crap from hacks. Instead, here’s my fail-safe plan for Tories and Brexiters to win and win big, come what may: Boris sticks Nigel in the House of Lords and names him chief negotiator with Barnier. Better yet, Boris or Hunt offer Nigel a major cabinet post, thus ensuring a victory for the good guys if it comes down to elections. And this should take place sooner rather than later. No more fears over a general election. A massive victory for those who have respected the people’s 2016 vote will follow. Boris and Nigel, Nigel and Boris, they go together like a horse and carriage.

“Among the most undignified of professions are acting and politics, and yet very good people enter both.”

Once Boris went ahead in the voting I noticed the media began to concentrate on character issues. (They would, wouldn’t they?) Character, of course, is very important, but brains and strength of will are even more so. Churchill had more of the latter, Chamberlain more of the former. Jimmy Carter, the nicest of men and a husband who never cheated on his wife but sinned in his mind, was among the worst presidents ever. Ditto George W. Bush, the architect of the Middle East mess of today. Ted Heath never cheated because he never had anyone to cheat on; still he was among the weakest leaders ever, handing over the nation to the unions and spending a lifetime in Parliament hating the greatest premier ever.

Needless to say, the greatest foreign minister of any country at any time, Talleyrand, seduced more women than his boss Napoleon ennobled faithful soldiers—close to 500—and he even managed to sleep with three generations of the Duchess of Dino: Grandma, Mama, and daughter. It takes character to do it, and it took character to save France in the Congress of Vienna while playing with the weakest of hands. His rival, Prince Metternich, was also no slouch. He missed an opportunity to incorporate a vast region into the Austrian empire while busy elsewhere making love to Princess Bagration, only four years after Katya’s brave hubby, the prince Bagration, had been killed in the Battle of Borodino. When informed by aides, Metternich thought it over and announced, “She was worth it.”

Now, that’s what I call character! Let’s have more erotomaniacs and fewer hypocrites. Boris’ detractors fear that his no-deal policy will lead to an election they are bound to lose, but with Nigel in camp he can tell the Fifth Columnists and the poison dwarf, “Molon labe.” They are the two sacred words of Leonidas of Sparta answering the Persians at Thermopylae who had demanded the 300 to lay down their arms. Come and get them, assholes. (The last word is mine, not the king’s.)

Holding people hostage is as old as the oldest war, and what the Brussels baboons are doing is nothing new. The Soviets held their satellites hostage with tanks. The baboons are doing it with bureaucratic Fifth Columnists after having Calypso’d nation after nation into the Franco-German trap. Britain was a mess when it joined, a country led by weaklings with illusions about a united continent. The great Lady T smelled the rat late, but nevertheless smelled it and was going to do something about it when stabbed in the back. (Hey you, with the recently acquired furniture, take a bow!) Whitehall mandarins have been working to keep Britain in ever since.

Lastly, what would happen if TV license payers who see the left-wing anti-Tory and anti-Brexit coverage of the BBC suddenly stopped paying? What would happen if half the country said, “No more moola.” I don’t know how it works, but something has to be done. The Tories have been in power for ten years and the BBC is more outrageously left-wing than ever. I’m back in London going to a great Rupert Hambro lunch and then to the summer party at the house of the man who started it all, Sir Jimmy Goldsmith. Up yours, Barnier!