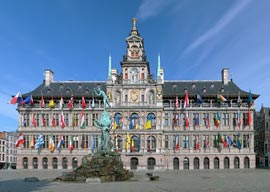 As the general election in the United Kingdom approaches, the British people are terrified, with polls indicating a hung-parliament, or a government whose fate lies cradled in the merciful arms of Nicola Sturgeon, leader of the Scottish National Party (SNP). It is on this note that Belgium springs happily to mind. The parallels between what we anticipate politically, and what Belgium is and has been living are striking, as is the manner in which the Belgians have dealt with these various forms of chaos; and both the former and latter might serve as a lesson and a comfort to the British in these uncertain times.

This unassuming (or so people think) country, once went 589 days without an elected government. At the 2010 national elections, the Dutch-speaking New Flemish Alliance (NVA) from the northern “Flanders” region and the French-speaking Socialists (PS) from the southern “Wallonia” region attempted to form a cabinet and utterly failed. The age-old conflict between the poorer North and the richer South has meant that a federal government has always struggled to be effective. But on this particular occasion, negotiations brewed such uncompromising animosity that agreement became practically irrelevant. This was war.

“The age-old conflict between the richer North and the poorer South has meant that a federal government has always struggled to be effective.”

Points of contention between the two sides included a Wallonian grudge about Flemish collaboration during World War II.  On the Flemish side, rage stemmed from paranoia that the French speakers are trying to colonise Flanders by imposing their language on its people. (This is real: I was once ignored in a bar in Antwerp when I spoke French to a waiter by mistake.) In response, the Walloons accuse the Flemish of being segregationist. And around in circles we go.

If we delve deeper into the tensions however, similarities to Britain’s own problems emerge. The Flemish accuse the Walloons of depending on economic subsidies from Flanders, and for benefitting from “pocket-money federalism”, a distribution of finance where regional governments are not accountable for what they are earning or spending. Britain’s very own Barnett formula, an outdated system which distributes funds around Britain, most would say unfairly and to the detriment of the English, comes to mind. The Flemish also resent that the French, who are fewer and poorer, have the power to veto their laws. Again, not dissimilar to Britain’s West Lothian question, which refers to Scots being able to vote on laws affecting England, but not always vice versa.

In light of the similarities, imagine the scenario of an ungoverned country as the worst possible outcome, and consider how little it seemed to actually affect the Belgians when it happened to them. While British sensibilities are deeply troubled by irregularity and disorder, the Belgians, au contraire  289 days into their government-free stint, when they took the record for the longest a country has ever gone without a government since Iraq after the fall of Saddam Hussein, celebrated the “milestone” with street parties” nominally protests” holding placards inscribed with “no government, great country”. To their credit, some well-refreshed students, in the name of protest, did strip naked on the streets in an attempt to prove that all Belgians are the same underneath, and then had more beer and frites.

Indeed a Bruxelloise friend, who takes little interest in politics, said she didn’t realise for months that her country was in the throes of a political phenomenon. “Everything just went on as normal.” And she might even have had a point. Figures showed no indication of malfunction. Growth superseded the EU average, while unemployment remained almost a percent below the EU average. In light of the figures, Marc De Vos, a law professor at Ghent University, remarked that “by and large, everything still works. We get paid, buses run, schools are open.”