Let Them Be Fake 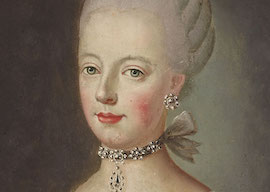 I suppose that if I had to select a single figure as the preeminent intellectual influence of our time, it would have to be Marie Antoinette. She, you remember, played at being milkmaid or shepherdess while actually she was Queen of France. She had at least the excuse that being Queen of France was extremely boring, such was the stiflingly formal nature of court life. By contrast, Mark Zuckerberg, when he dresses in jeans and a T-shirt and pretends to be an average adolescent slob reluctantly attending college for lack of any idea what else to do, has no such excuse.

And then there are all those people, some of them not even very young anymore (except in tastes and intellect), walking around in carefully and expensively torn jeans, presumably in solidarity with the homeless of Kinshasa and Ouagadougou, etc. It infuriates me when I think of the effort that poor Africans make to turn themselves out well, often in circumstances in which even the water in which to wash clothes cannot be taken for granted. It is only if you think that Marie Antoinette was paying a real compliment to milkmaids that you will think that torn jeans represent anything other than spoilt-brattery.

Then there are people such as Justin Trudeau, that is to say Trudeau II or Trudeau fils, and Jacinda Ardern, the Pasionaria of New Zealand Islam, who can’t wait to don fancy dress in their effort to proclaim their multicultural goodness, and who both exude the kind of unctuous righteousness that makes you want to wash afterward and leaves a trail of moral slime behind them.

Trudeau and Ardern are two of a trinity of leaders whose photograph I cannot bear to look at even for a second, Anthony “Call Me Tony” Blair being the third. I turn over the page, or exit the website, as soon as I catch so much as a glimpse of any of them. Honesty compels me to admit that this is not because, objectively, they are the worst leaders in the world, which alas they are not, but they are certainly the smuggest, and there is something in their smugness that is more offensive to me than mere wickedness. Wickedness is at least interesting, while smugness is not. Their problem is that, in their own estimation at least, they were born with Original Virtue, unlike everyone else.

“The BATs are followers, whether they know it or not, of Marie Antoinette.”

Smugness is not one of the seven deadly sins, but it is certainly a close relation to the greatest of them, namely pride. It is perhaps worst, most fulminating, most highly developed, in the case of Blair, in whom it appears to be allied to a very serious mental condition, that is to say delusions of honesty. A delusion is a fixed false belief that is impervious to reason, evidence, or argument, and notwithstanding his record Blair seems genuinely to believe that he is an honest man. I hesitate to call him a liar, however, because a liar must at least have some concept of the truth other than the words that come out of his mouth, and in any case only he is party to his own thoughts.

It is said that we get the leaders that we deserve. I am not sure whether this is true, but it is likely that our leaders do not emerge fully formed like Venus from the sea in Botticelli’s painting. Their relationship to the population they lead is a dialectical one: They both reflect and form that population. (The French radical politician of the 19th century, Ledru-Rollin, is said to have said, “I must follow the people because I am their leader.”)

If we get smug leaders, therefore, it is because smugness is a characteristic of at least a considerable part of the electorate, and being smug themselves, they like smugness in others; or alternatively it is because people are tone-deaf, as it were, to smugness, in the way that many people were and perhaps still are tone-deaf to the obvious fraudulence of TV evangelists such as Jimmy Swaggart. If you don’t see the fraudulence or the smugness straightaway, then you never do see it; you don’t deduce it from other characteristics, you see it at once if you see it at all.

This is not a matter of intelligence, for intelligent people are frequently deceived by the fraudulent and the smug, and in fact are the more dangerous when they are so deceived, for they have more influence on and in society. I remember some years ago attending a conference in which a well-known Islamic preacher, said to be moderate, modernizing, and reformist, spoke. I spotted at once that he was a crook and a liar, but to my astonishment several well-known intellectuals seemed to have been completely taken in by him. There are none so blind as will not see.

The BATs of this world—the Blairs, Arderns and Trudeaus (or should it be Trudeaux?)—are growing more numerous; for in politics, as in many other things, demand creates its own supply. Our children seem to be increasingly indoctrinated into unthinking and sickly high-mindedness, into a kind of magical thinking in which expressing a wish to do good is nine-tenths of actually doing good, just as possession is nine-tenths of the law.

The BATs are followers, whether they know it or not, of Marie Antoinette. They are politicians and seekers after power who play at being saints. There was an African leader, Julius Nyerere, who died in 1999, who is actually undergoing canonization at the moment (the Catholic Church, as an equal-opportunity employer, desperately needs a few African saints). One of Nyerere’s miracles was the extraction of billions of dollars of aid from Western countries without any obvious benefit to his population; on the contrary, he used the money to enable him to collectivize the agriculture on which 90 percent of the population depended, producing an economic disaster. Another of his miracles was staying in power for 25 years at the head of the single party that locked up opponents. A third miracle was that, unlike Marie Antoinette, he died in his bed, or at least in his hospital bed (in London, incidentally, not in Africa). But he did a very good saint act, and that was enough to fool the world. He was ahead of his time, but not as far ahead as Marie Antoinette.